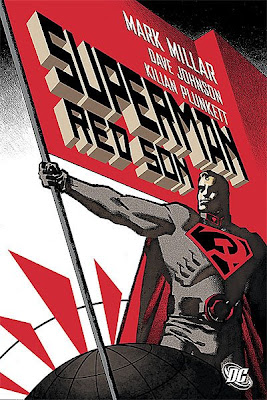 Here's a project that I worked on. There's going to be a Deluxe Hardcover version of Superman: Red Son that will be released on November of 2009 as pictured above. It'll be the first time this book sees print in hardcover. Deluxe edition, no less. So there's still time before it's released. You can red more about this hardcover here. 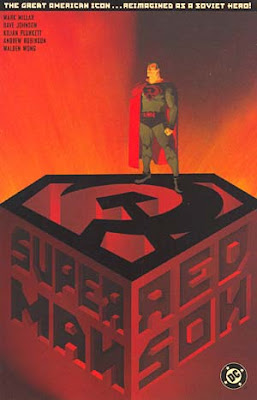 Red Son seem to so well for DC Comics. When DC Comics was venturing into graphic novels being downloadable through iTunes, The first three Graphic Novels that was decided to be used were Watchman, Batman: Black and White, and Superman:Red Son. For a book that came out a while back, it still has a lot of mileage. Before the trade, iTunes, and the upcoming Hardcover, it was originally released as a three issue prestige mini series in April of 2003. Below are the covers to the three issues in the order they were released. 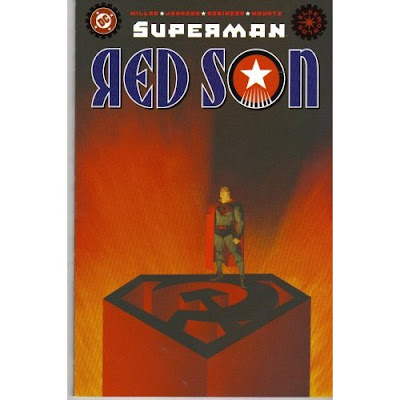 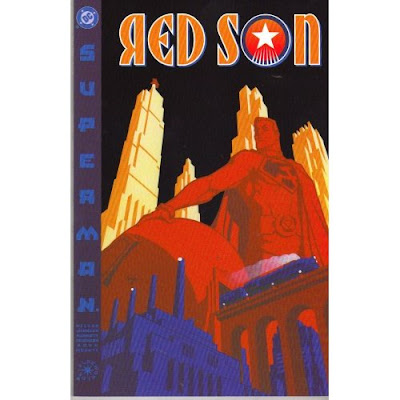 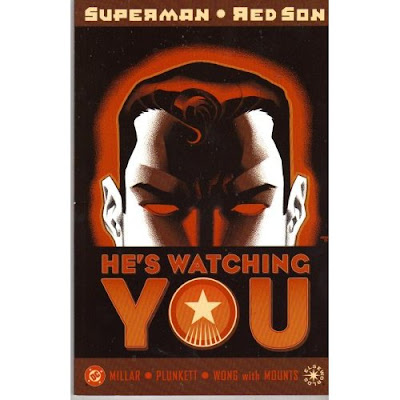 I didn't work on the first issue. I jumped on board with issue 2 and 3. I still remember being asked to work on the project. Before it fell on my lap, it was in the works for five years. It went through a few Editors before it landed on the Editor who offed me to ink the last two issues. It was a project that got shelved, then put back up, then shelved again and so on. So people who were involved, were dreading the project. When I started work on it, I was the only one excited for it. They all thought I was crazy. For me, it was all fresh. I didn't go through those five years. On top of that, I got to ink Dave Johnson before he left the book and Killian Plunkett who later took it over. I also got to work on a book that Mark Millar wrote. Not only that, the Editor I was working with was Tom Palmer, Jr., Son of Tom Palmer who's one of the legendary inkers out there. What's not to be excited about? I'm looking forward to seeing what this Deluxe versions brings. Maybe additional bonus materials? Looks like we'll have to wait about five months to see.
Posted by Walden Wong at 1:48 AM No comments:

A couple of weeks ago, I wrote about a Tour De France animation project I did for versus.com (See my posting on June 9th below). Today, they released another Episode. Here is my inks for Lance Armstrong. Lot of Lance Armstrong fans out there for sure. I've already been asked by a bunch of people to sell some of the artwork for it. 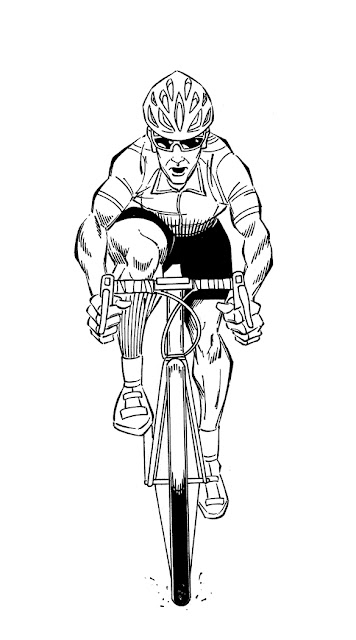 Below are the images for the backgound cyclist. Again, lots of thick and thin lines with the inks. Broken lines and dots. I did a lot of whipping and flicking on the pin nibs to make them look l ike this. 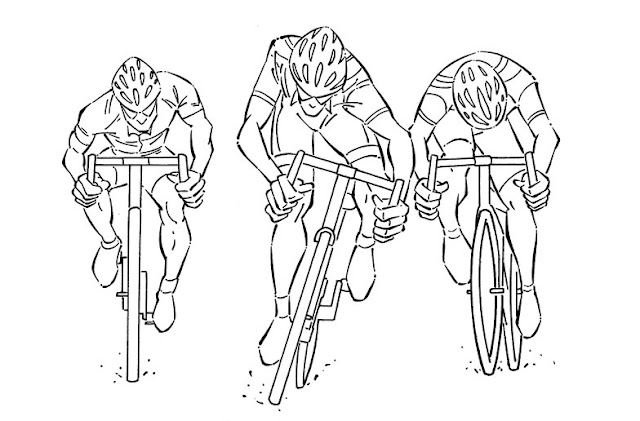 Below is another image of a couple of cyclist. They both look the same. Only difference are the legs which needed to be done in two differenty the animators can make them look... um... animated. Lots of images are done this way to help out on the animation. 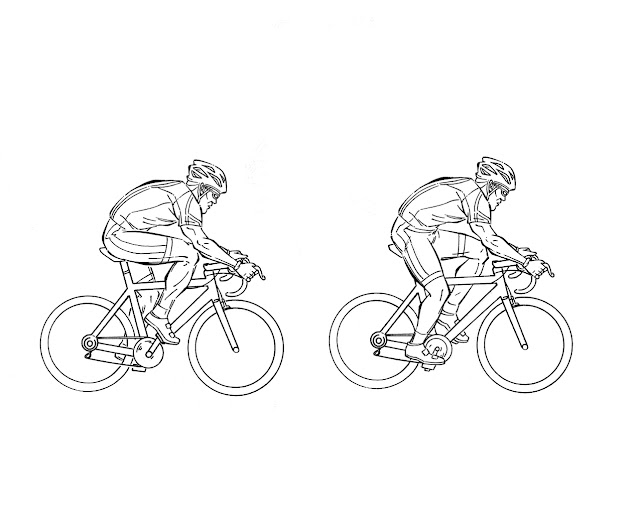 The three images above are just a few of many images that I've worked on. I could post every piece of work which would be boring to look at. Instead, take a look at the animated video by clicking here. Episide 4 is titled "Battle Preparations". All the line work you'll see in the video was inked by me. Very cool to watch.
Posted by Walden Wong at 4:49 PM 2 comments: 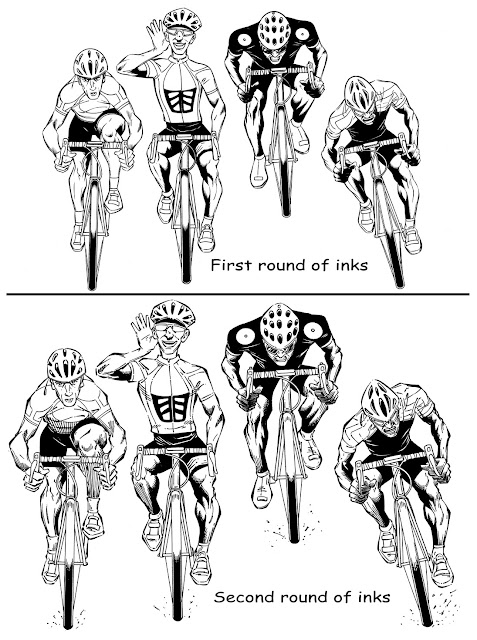 Here's a fun project that I worked on. Not a published comic book, but an animated episode with voice over. I'll give you the link at the end of this post.

I was contacted to do some work for versus.com on Cycling and the world famous even, Tour De France. During that time, they were looking for someone who would supply the art. So I referred a friend, Richard Lee, to take on the project. I was involved for maybe a couple of days assembling a team (penciller, inker, colorist), then I decided to leave the project and just let Richard do the pencils and inks. Mainly because we only had about a week to complete the project. I figure it'll be quicker if Richard inked himself and I just wash my hands clean from the project. The very next day, the company contacted me back and said they wanted me to be on the project because "I get it". Something about the way I inked that gave it a specific look that wanted for the project. So I told them that if they wanted me on board, there's a certain deadline that each of use needs to meet to make that one week deadline. One of the things I do well is scheduling myself with work so I'm always ahead of schedule with deadlines. In this case, I outlined a schedule for the penciller, myself, and the colorist. Penciller gets 4-5 days, I get max 2 days, and colorist gets 4-5 days. I know my own work habits but not the penciller or colorist. So I rather they have more time than myself. I can always burn the midnight oil which is something I'm used to doing. Which I did.

Now onto the inks. They did say they wanted my ink style. I didn't know what that was. Because when I ink, I can ink in any style. It's what the pencils call for that makes me decide how the inks will go. So when I received the pencils to be converted to Blue Line inks, I inked it like the way you see in the first round of inks above. When I submitted those images, it wasn't what hey were looking for. They wanted the inks to be more darker, more edgier. So I did a second round of inks (see the second set of images above) at a complete different direction which was then approved. So from then on, I inked everything in that style. It's always a plus to be able to ink in any style so you're not just stuck with one. Lots of images were done. Image of people riding a bike, flopped images, backgrounds, individual elements which will be used to create the animation and so forth.

The nice part about this is it'll be used for the versus.com website as a animated graphic novel. Also, clippings of it will be used for a bunch of 30 second commercials which will run on Television during the Tour De France to create excitement. On top of that, the whole episode will air on TV during he event. So you'll see this on TV if you're watching the Tour De France live.

The Animated Graphic Novel is called ADVENTURES OF THE EPIC CYCLE and I worked on episode 3, "EYE OF THE VETERAN". You can watch it here. You may need to click on Episode 3 to view it if, it's not already there.
Posted by Walden Wong at 11:06 PM 3 comments: 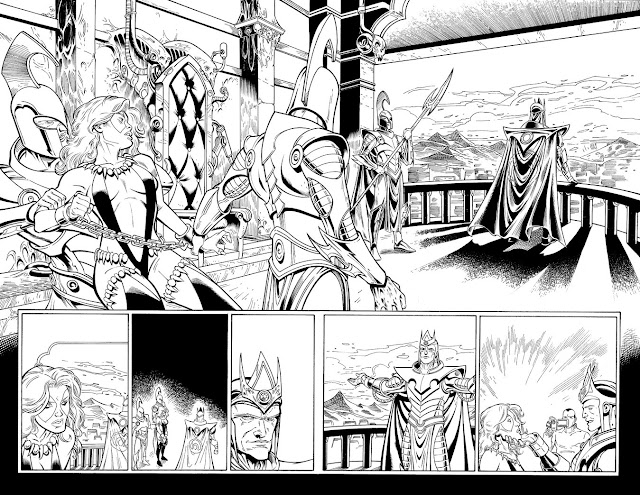 Here's a double page spread from this issue that I helped out on.  My inks over Chad Hardin's pencils.  I think I helped out on six or eight pages?  I forget.  For those of you who has this issue that came out this week, maybe you can spot the pages I ink.  That's, of course, if you can spot the difference in the inkers work.  To find out more about this issue, click here.
Posted by Walden Wong at 2:28 PM No comments: 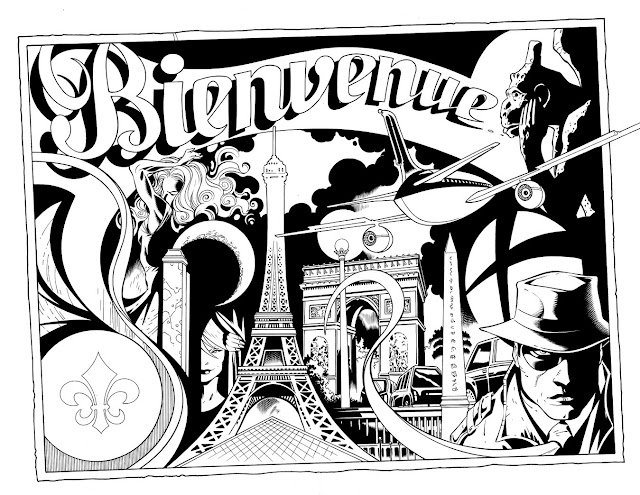 There were two pencillers on this issue which I inked. Justiniano pencilled the bulk of the issue. Above is the double page spread which we worked on. If you look closely, you'll see the word "SPIRIT" right across the page as part of the artwork and background. Lots of fun stuff going on.

Below is one of the pages Tomas Derenick pencilled which I inked towards the ending of this issue. 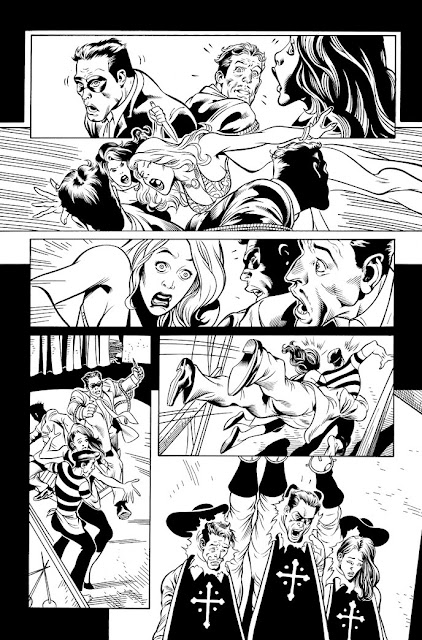 This is the last issue of our three issue store arc written by Michael J. Uslan and F.J. DeSanto.
You can get more info about this issue here. It's out in stores now.

Posted by Walden Wong at 2:36 AM No comments: 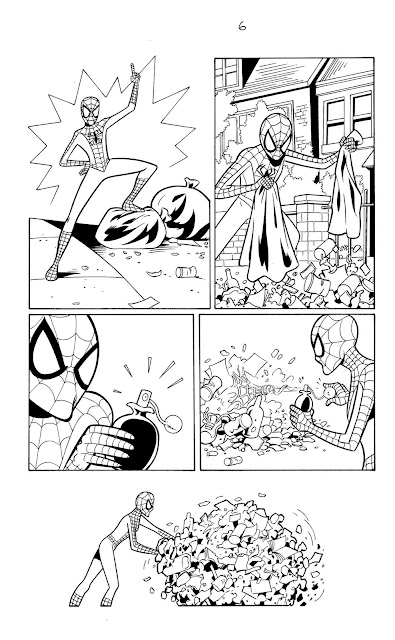 Helped out on two short stores for this issue. One story, "Spider-Ma'am", pencilled by Adam DeKraker and inked by myself. The above image is one of the pages.

The other story, "Exit Interview", was pencilled by Tim Levins and inked by myself. Below is one of the pages I inked. 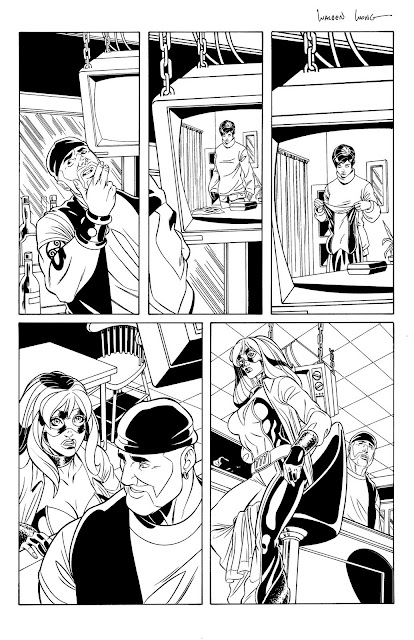 You can find out more as well get an Exclusive Preview here. It's out in stores now.
Posted by Walden Wong at 10:12 AM 2 comments: