Final Crisis trade paperback comp came today of which I did some work in. 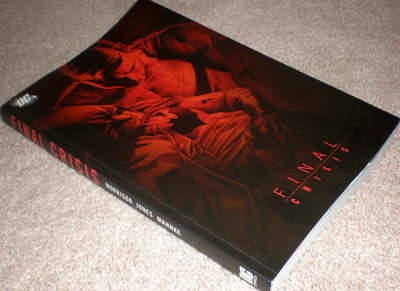 Got a big batch of comp copies for REBELS #16 because I inked the whole issue.  With DC Comics, the amount of comps you get from your work depends on how many pages you worked on and how many creators are involved.  The most I've every gotten for comps are twenty five copies.  Here's a picture of the comics. 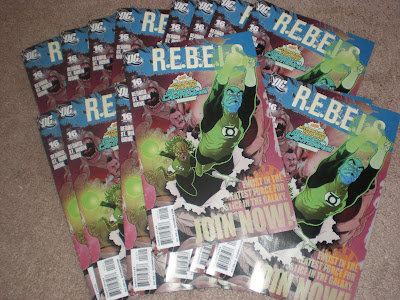 Originally, Scott Hanna was supposed to ink this issue but he came down with the flu.  I was called in to ink a few pages.  One thing lead to another and I was asked if I would be interested in inking the whole issue over Claude St. Aubin's pencils.  And here we are today.  The following page may look familiar because I posted some of it to a Daily Desktop a while back. 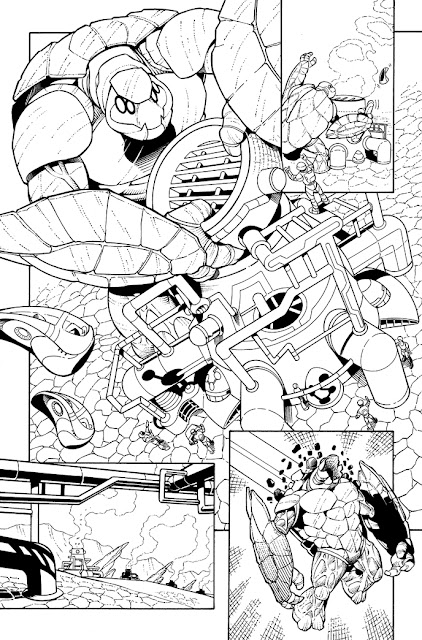 With this project, I was asked to mimic another inker along with doing a lot of stippling with the inks.  If you look closely through these black & white images, you'll see a lot of dots that form lines.  Those dots are stipples.  Stippling takes a while to finish, but it was fun to do. 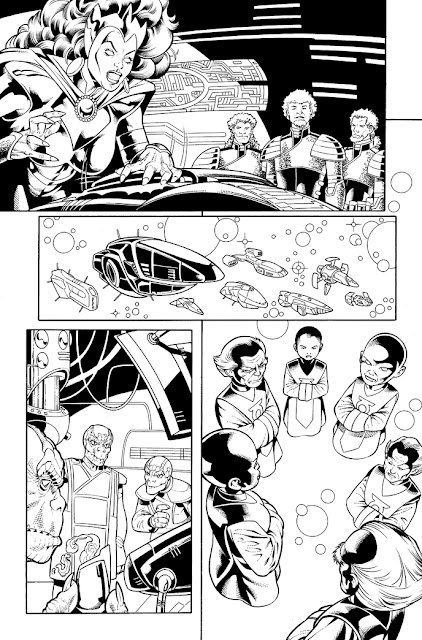 This issue also introduces two new Green Lanterns.  Here they are below in panel two.  The green lantern logos isn't in the orb on their chest yet.  Which alarmed me thinking Claude, the penciller, forgot to draw them in.  But there's a reason it's not there.  You'll have to get to book to find out more. 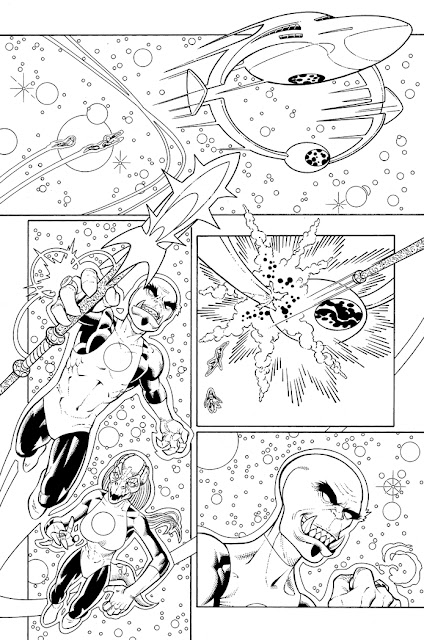 The whole issue, I inked on Blue Line printouts over high resolution pencil scans.  Below is one of the pages with Starfire in it.  First the long legs in panel one, then followed by panel two.  Sexy!  You can see a preview of this issue by clicking here. 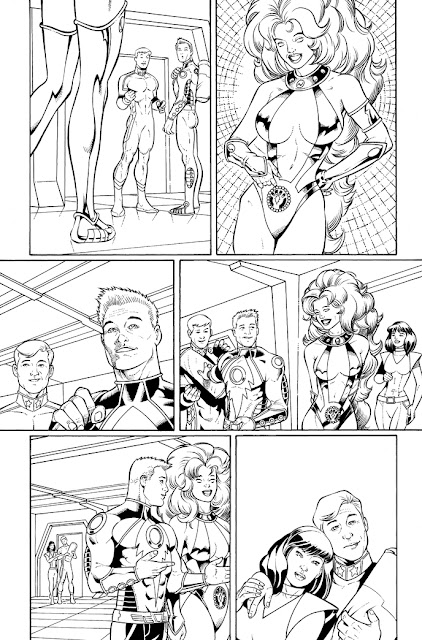 The regular inker for this series, Scott Hanna, contacted me after he saw the issue to say I did a good job and that he was glad DC found a good inker to replace for the issue.  Nice compliment especially coming from Scott.
REBELS #16 is in stores now.  More info by clicking here.
Posted by Walden Wong at 10:13 AM No comments:

As the cover reads, Brightest Day Titans Villians for Hire Special.  A book I worked on which I just got comp copies of.  My inks over Sergio Arino's pencils.  Inked on blue line printouts from high res files e-mailed to me from the artist located in Spain.  Here's a picture of the comics. 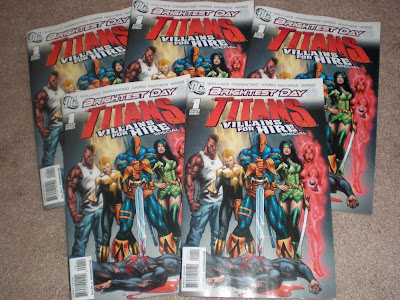 One of the pages with Deathstroke the Terminator.  *RAT-TAT-TAT-TAT-TAT*  except in the comic, there was no special effect like that in the first panel. 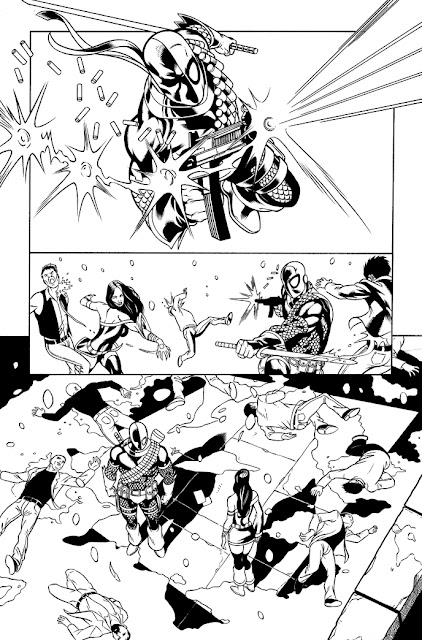 Another page below where they're in a car.  One of the things about inking over blue line printouts is sometimes, you loose some of the pencil details on the faces because the blue printouts are so light.  I usually print out a black and white copy of the same page and have that next to the blue line page to reference. Other times, I will have the high res file opened on my computer screen and I'll zoom in to reference the faces on the blue line boards I'm inking on.  I'll just look back and forth from my monitor to bristol board to make sure all the lines I'm inking are not missed.  When it comes to faces, I like to make that extra effort to not loose any details when inking on blue line printouts. 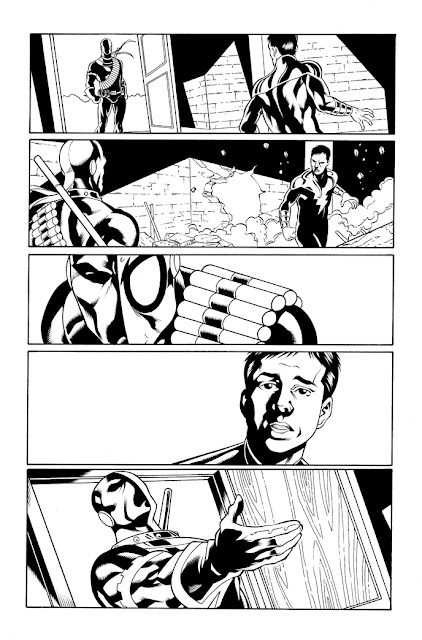 Finally, I was also sent variant covers for this same issue. 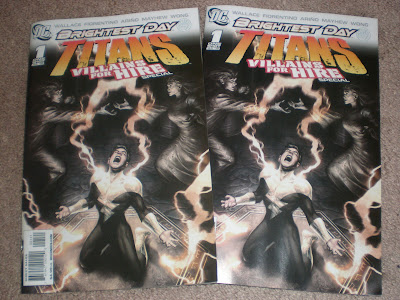 This comic is in stores now and you can click here for more info.
Posted by Walden Wong at 7:13 PM 2 comments:

A while back, I posted a cover I've inked over Brett Booth's pencils for a book called Pulse of Power.  You can read that here.  That was over six months ago.  Today, I finally heard more about it.  Looks like it'll be published under Dynamic Entertainment instead of Dable Brother Publishing like I originally had thought.  Here's the cover all nicely colored up with title and logos from the publisher. 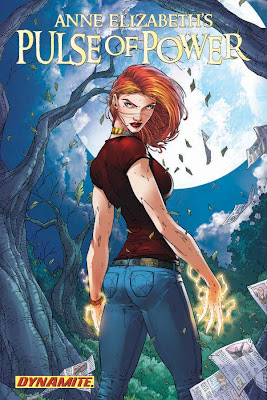 My inks before the colors. 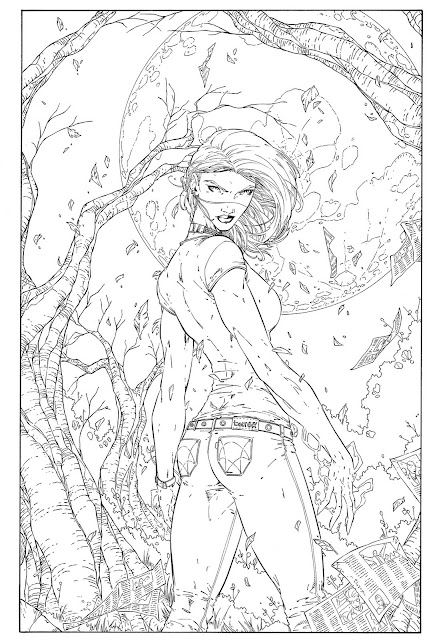 Not sure when it'll be published.  There's a write up about the book over at Newsarama and you can read more about it by clicking here.
Posted by Walden Wong at 10:33 AM 5 comments:

Another inking commission over Arthur Adams' blue pencil drawings.  This time, of Black Widow.  Here's the before... 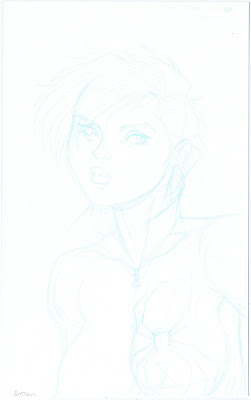 And after I slapped inks over it.  I must say, I'm really enjoying these blue pencil drawings.  There's a sense of freedom to where I get to decide where a line is inked and a form of consistency where I do my best to ink like Arthur.  I'm really happy with how this piece turned out. 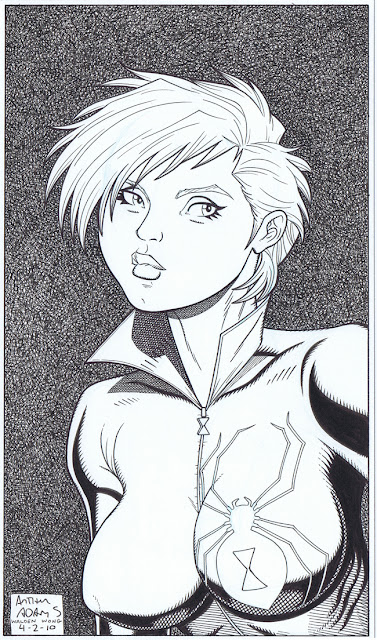 PREDATOR PREY TO THE HEAVENS

Just got comp copies of Predator: Prey to the Heavens from Dark Horse Comics.  Nice compilation to the comic book series that I've done some work on. 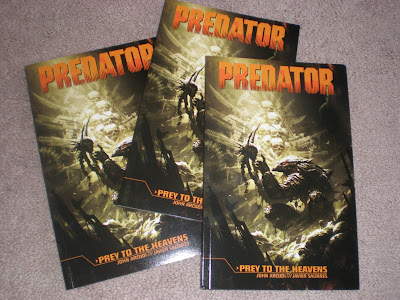 They're available and in stores now.
Posted by Walden Wong at 10:25 AM No comments:

Recently got a bunch of comp copies of comics I've worked on from Marvel.   I blogged about these issue when it was first released.  Comp copies has made it's way to me now.
Here are some MARVEL ZOMBIES: EVIL EVOLUTION. 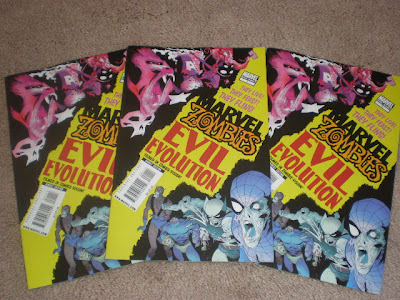 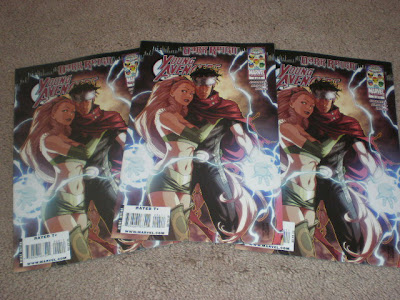 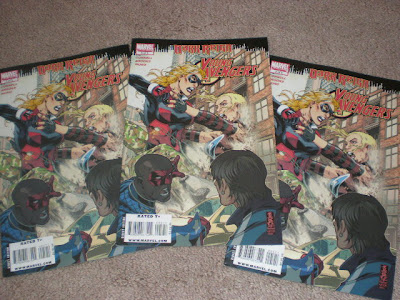 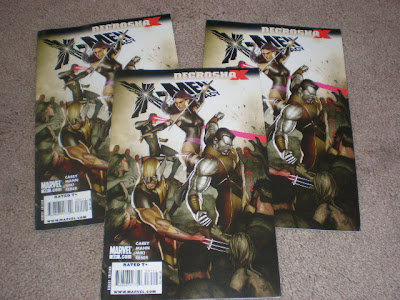 And last, but not least, DARK REIGN: THE SINISTER SPIDER-MAN #4 Interesting thing about both the Dark Reign: Young Avengers and Dark Reign Sinister Spider-Man titles.  Marvel sent me trade paperback comps for both a while back.  I would think the individual comic would come before the trade compilations.  Well.. better late then never.
Posted by Walden Wong at 1:00 PM No comments:

Here's another commission piece I've inked over Arthur Adams' pencils.   Skrulls!  Here's how it looks before I did any work on it.  Some of the areas were already filled in with Black.  Arthur drew this about four years ago and when I told him I was inking it, he remembered he partially inked it.  Great memory! 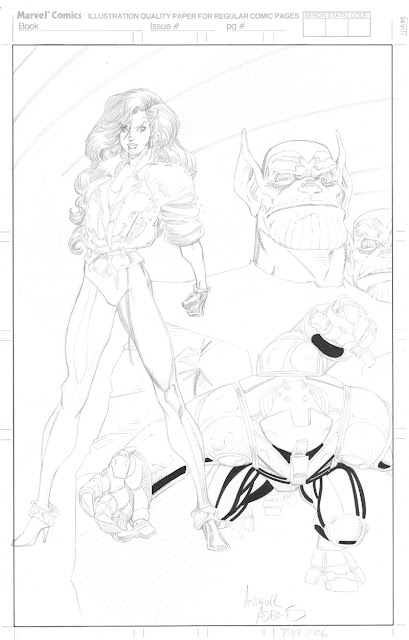 The person who commission me wanted the extra two Skrulls in the back left, which was drawn in a really light blue pencil.  I could hardly see it in the original when I was inking it.  I followed what I could see and referenced the line work from the other two Skrulls on the right.  Here's how it looks when I was finished.  I think that's supposed to be Kitty Pryde as a Skrull. 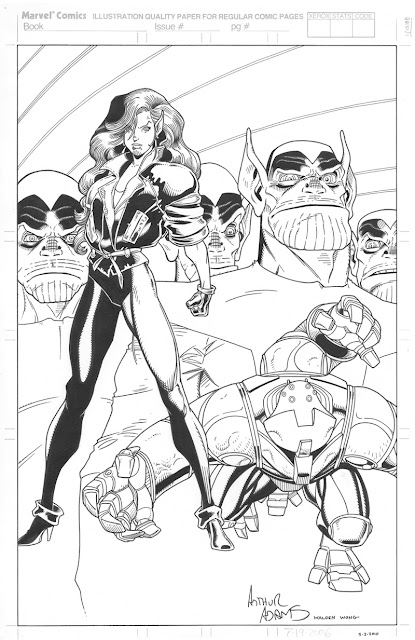 Got copies of SUPERMAN BATMAN #71 which I did some work on. 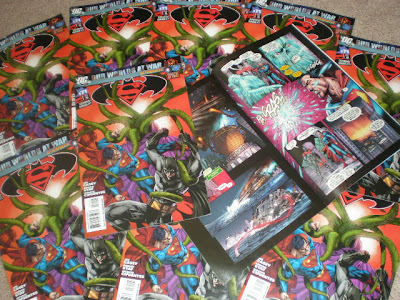 My inks over Jason Fabok's pencils.  My Editor told me he's Dave Finch's apprentice.  Below are some of the pages I've inked.  This one is the same page as the one I have flipped opened above. 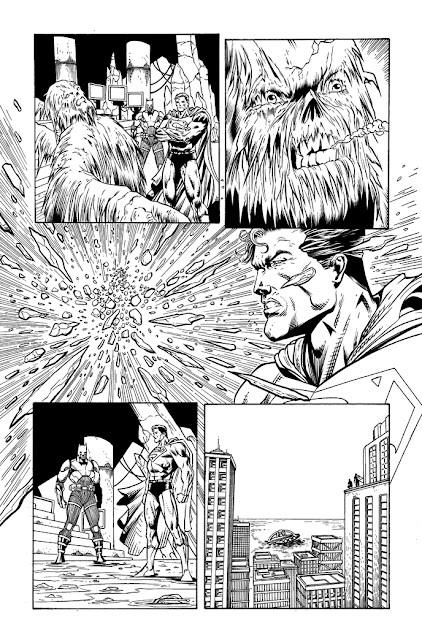 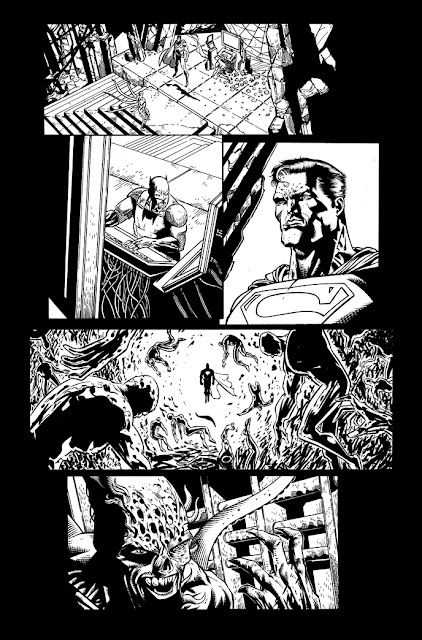 In stores now.  You can click here for more info.
Posted by Walden Wong at 11:41 AM No comments: 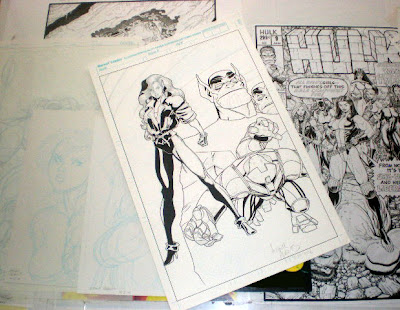 Commission pieces.  Lining up towards the left.   Never thought that I would get a line of commission pieces over Arthur Adams' work.  Lucky for me, the references I had from when I was inking the HULK over Arthur (over a year ago) is still underneath the plexiglass on my drawing table.  Too lazy to remove them since then.  Look like laziness pays off this time.
I don't used the references to see how certain characters are drawn.  Instead, I used the references to see how certain lines are inked.  Thickness, angles, curves, etc.  When I inked Arthur's stuff, I like to get as close as possible to his own inks.  For me, there's a sense of achievement in doing that.  Which I enjoy.
Posted by Walden Wong at 1:20 PM No comments: