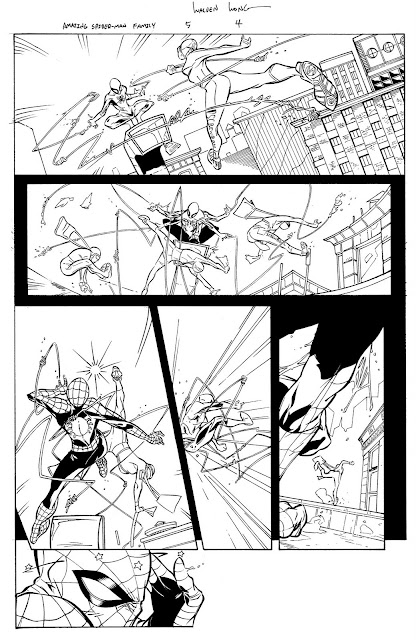 Out this week. There's a 10 page story in this issue pencilled by Mark Robinson and inked by myself. When I was inking this page, the ink was bleeding because of the board I was working on. Sometimes the paper stock isn't as nice and smooth. After inking, I had to get back in there and touch it up. Which turned out okay because the printed image won't see all the white out that was used. A few weeks back, I was reading a comic book news website and I stumbled upon an article about upcoming books in the Spider-Man universe. Among some of the images in the article, I find a colored image of the page I inked. This turned out looking really good. It's always nice to see pages all colored up after I'm done. It's like seeing a child go to college and growing. Not that I have a child going to college or anything like that. 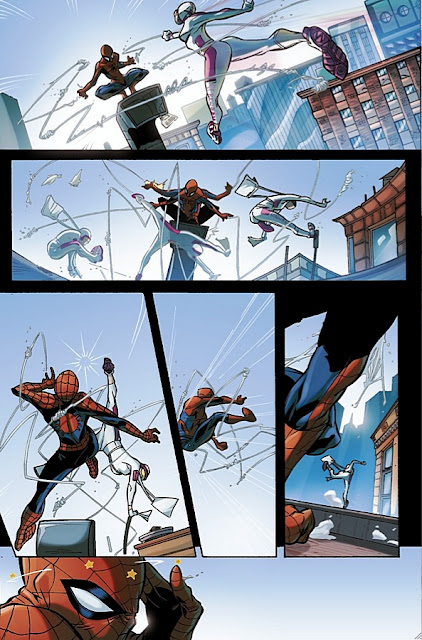 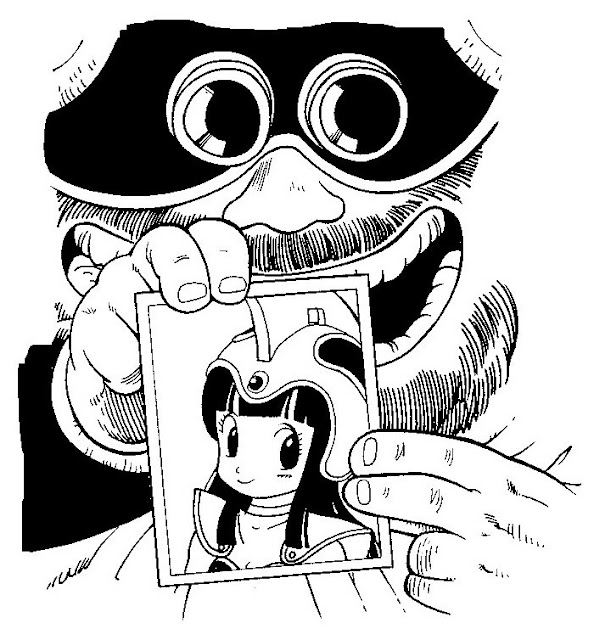 Akira Toriyama is the creator of Dragon Ball among many other titles from Japan. VIZ Media publishes those books as well as art books here in America. I was asked to do some work over some of Akira Toriyama's work. Not over original pencils or anything like that. Over digital files. This image is something I inked which will be included in an Dragon Ball art book. Originally, this image was taken/clipped from an Manga (or graphic novel). It was later blown up for the use of the artbook. Because it was blown up, the image was too pixelated. So a Blue Line was created out of the pixelated image and I inked on top of that. Getting rid of all the jagged lines by inking smoother ones and staying true to the original image. I used a regular sized sharpie as well as a fine tipped one. Some of the linework, I would go over a several times with the fine tip sharpie just to get the exact thickness that was originally there. After all the line work was completed, I scanned it in with photoshop and dropped in all the blacks. Then off it went. Found out later that it won't be used. As much as everybody at Viz likes it, the License Holders doesn't think it's a workable because it's changing the art. Oh well.... Still was fun to ink.
Posted by Walden Wong at 12:13 AM 3 comments: 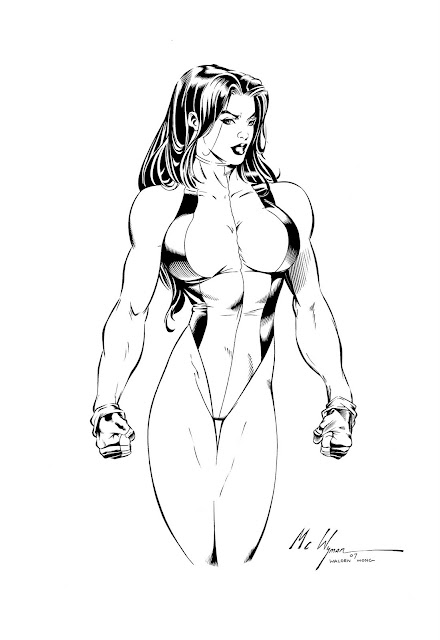 Pencilled by MC Wyman and inked by myself. Again, pushing the thick lines and breaking the thins. One of the techniques I enjoy doing are tapered lines. Those are the hatch lines that blends from the white to the black. Hair is something that needs to be inked smoothly. Sometimes I find myself holding my breath to have a steady hand just so I can get a smooth line on the hair. It's funny I do that. I don't hold my breath when I ink other areas. Only sometimes when I ink hair. Weird habit
Posted by Walden Wong at 9:30 AM 2 comments: 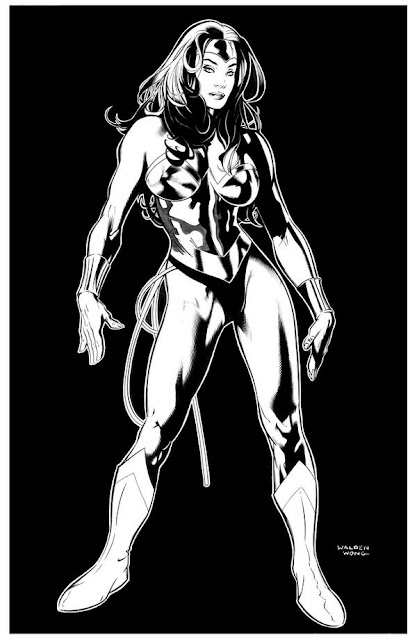 A year ago, I inked a Wonder Woman blue line piece that was auctioned off for charity at Super Con. The convention hosted an Inking Panel. Before the day of the convention, they would ask a penciller to draw up something for the event. They would then create blue line boards of the same image and send it out to different inkers. At the time, Adam Hughes pencilled a rough image of a female character that looked like Wonder Woman. But not quite because it didn't have all the details that Wonder Woman had. The stars on the tiara and shorts, logo on the chest, boots without the strips, etc. So naturally, the majority of us inkers assumed it was a Wonder Woman knock off. Including myself. So when all was done, every Inker turned in a piece that looks completely different from the rest. Every piece was unique in a drastic way. Some made it look like Wonder Woman while other make it look like something else. I was talking to Michael Bair and he even said "Adam Hughes tricked us!". 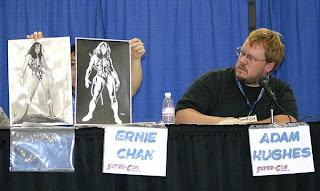 Here's a picture that someone took during the Inking Panel. Ernie Chan was also there, but that's Frank Cho holding the page that Adam Hughes inked himself along with my page I inked. And to the right, that's Adam Hughes leaning back and looking at my page. Love the body language. Probably thinking, "Who's this inker that massacred my pencils?"

Super Con liked the Inking panel so much that they made it an annual event. I'll be inking some pieces again for this year. As soon as I'm done, I'll be posting the images.
Posted by Walden Wong at 11:39 AM 4 comments: 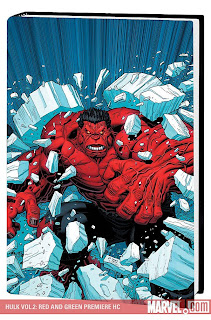 Collecting King Size Hulk, Hulk issues 7, 8, & 9 is in stores now. This is the one where I inked Arthur Adams' pencils. Good times. Now it's in Hardcover. There are two different covers for this. The one you see above drawn by Arthur and there's a Direct Marker variant drawn by Frank Cho. To learn more about it, chick here. 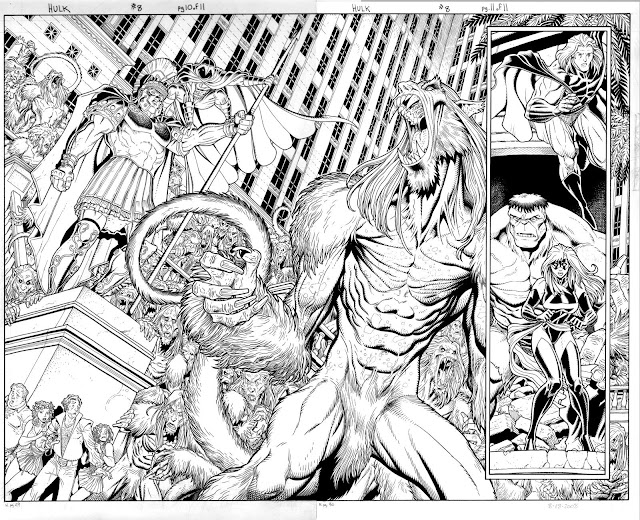 This is one of the Double Page spreads that I inked. Lot of work and lots of fun. I used a brush to fill in blacks. For the most part, I inked this piece with microns pens in different sized tips. Same kind of pens that Arthur Adams would use to ink his own work. Arthur gave me a bunch of microns when I was working with him. He also gave me photocopies of his other work where he inks himself. So I was getting into my Arthur Adams zone when I inked these pages. Using the same tools he uses and constantly referencing his inkwork on the photocopies. I'm very proud of how the pages turned out. Best compliment I got from Arthur was "I can't tell if you inked it or if I inked it myself."
Posted by Walden Wong at 9:48 AM 5 comments: 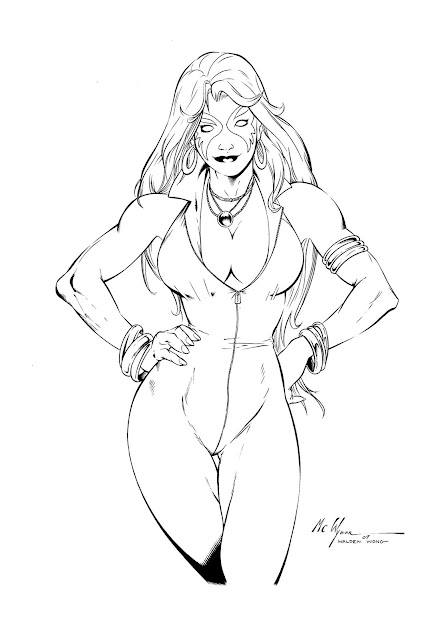 Commission piece I inked over MC Wyman's pencils. The pencils were drawn a couple of years back and I was recently commission to ink it. Originally, the pencils were scanned in then e-mailed to me. Once I got the file, I created Blue Lines with photoshop, printed it out on a bristol board, and inked on top of that. Not a lot of blacks on this piece. I played around with the line wights where some areas are really thick while others are so thin to the point where the line disappear. Purposely ignoring the light source. I always like broken lines because it gives the illusion of a complete line while creating dept.

Posted by Walden Wong at 9:24 AM No comments: 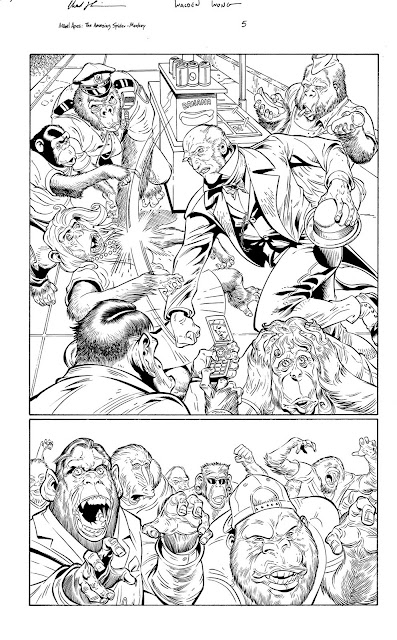 Here's something I inked over Chad Hardin's pencils over at Marvel. It was a 5 page short story in the book. I've inked Chad's pencils in the past on a book called REIGN IN HELL over at DC Comics, so I was familiar with his work. Lots of Apes and Monkeys! MARVEL APES SPEEDBALL SPECIAL is in stores now.

Posted by Walden Wong at 8:30 AM No comments: 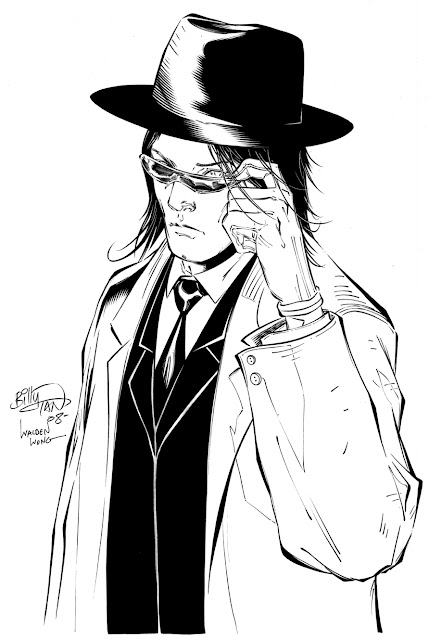 Here's a pin-up I worked on for a book called Secret Identities: The Asian American Superhero Anthology. The book was released yesterday, April 15. and you can order it anywhere. I inked this pin up over Billy Tan's pencils, who drew this character based on the creation of actor, Sung Kang (of the the actors on The Fast and the Furious: Tokyo Drift). What's also interesting, I was in communications with one of the Editors on the project and I didn't know it before but found out later that he's the Actor, Parry Shen, who's I've seen on Television numerous times. After I found out, I told him I was a fan of his work and he said he was a fan of mines. Very nice surprise.

Here's how the cover to the book looks. Lots of comic book talent, Actors, and creative people involved. There are over sixty creators involved in this anthology. Worth checking out. 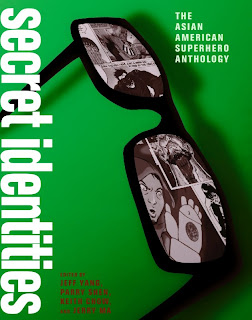 SECRET IDENTITIES is in stores now. To find out more about this book, there's a video on YouTube here.
Posted by Walden Wong at 9:34 PM 2 comments: 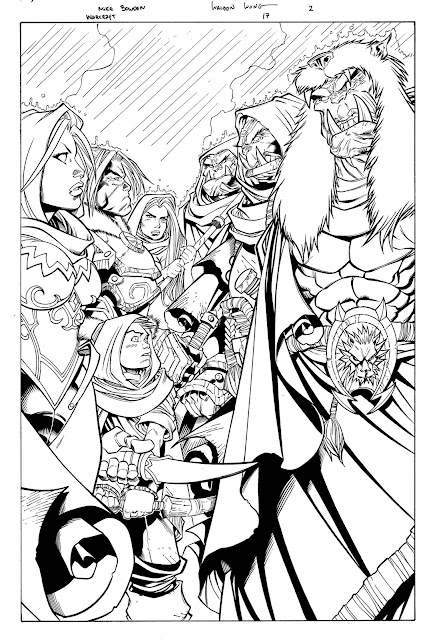 Written by Walter Simonson; Pencils by Mike Bowden, and inks by myself. This issue was released last month. One of my favorite pages in the book. I worked on two issues, #16 and #17 before Blizzard decided to move on to a different look for the series. Lots of excitement when I was working on this book. It was my first time working with Wildstrom. I got to work with Walter Simonson whose work I admire before I got into the business. Got to work with Mike Bowden who's a great penciller who's also the same person who runs the website, artadamsart.com. We spoke about me working with Arthur Adams a lot because I just finished my run on Hulk with Arthur Adams. And I got to work with Wildstorm Editors, Hank Kanalz and Sarah Gaydos. Hank Kanalz is Wildstorm's General Manager as well as the same person who was the editor at Malibu Comics back in the day that lead up to Image Comics. Sarah Gaydos is an Editor over at Wildstorm and she can't be any sweeter. Always making sure things were working smoothly and that I got paid. I believe I spoke with Sarah the most while working with Wildstorm. WORLD OF WARCRAFT #17 is in stores now.
Posted by Walden Wong at 11:53 AM 5 comments: 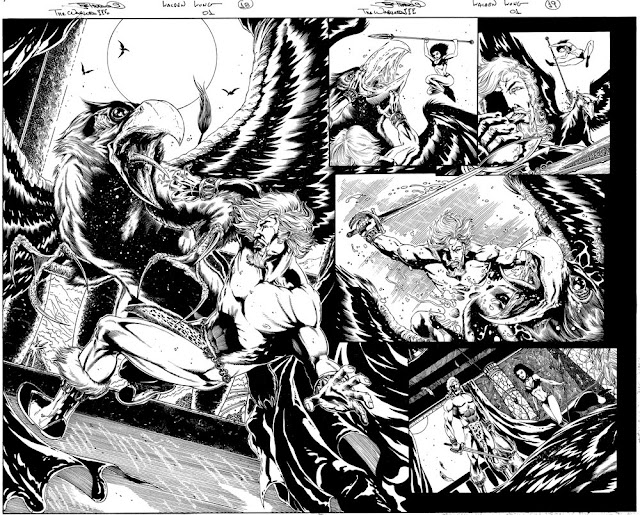 Written by Mike Grell, Pencils by Joe Prado, and inks by myself. Lots of rendering and textures went into this issue. This double page spread was the favorite of the bunch. WARLORD #1 is in stores now.
Posted by Walden Wong at 10:31 AM No comments: 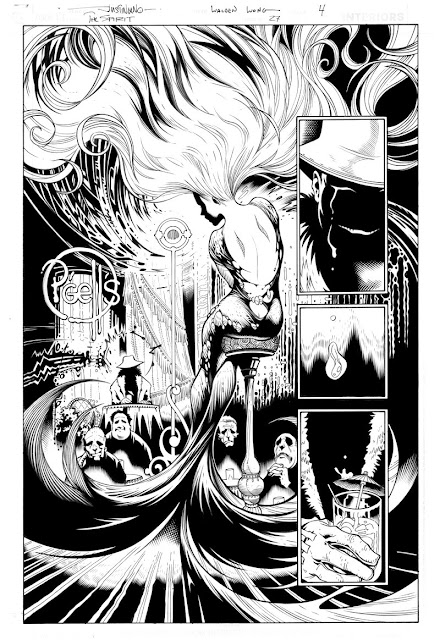 Written by Michael J. Uslan and F.J. DeSanto, Pencils by Justiniano and inks by myself. This page was the most fun. If you look closely at the tear drop in panel 3 above, you'll see a baby octopus drawn in. SPIRIT #27 is in stores now.

Posted by Walden Wong at 9:14 AM No comments: