Pen & Ink before the Inking 3 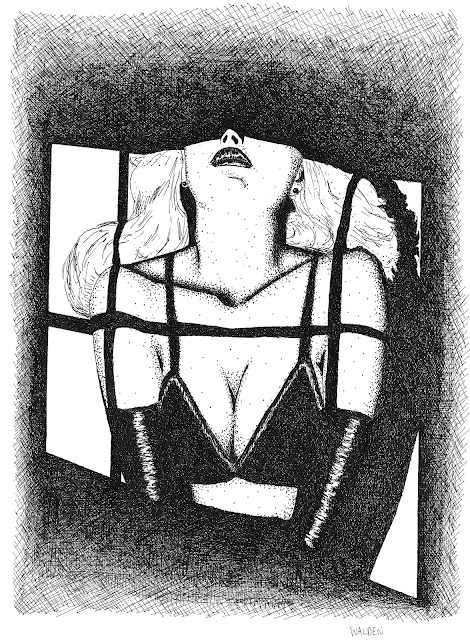 Another one of those Pen & Ink pieces I've done.  Before I knew anything about comic book inking.  This is the last of the trio I did based on the Black Kiss comic book I had back then.  Again, all pen work, no brush.  Meaning anything that seems black was cross hatched over and over to get there.
Posted by Walden Wong at 9:56 AM No comments:

Another commission I worked on.  Power Girl piece drawn in blue pencil by Arthur Adams.  Here's how the piece looked when I got it. 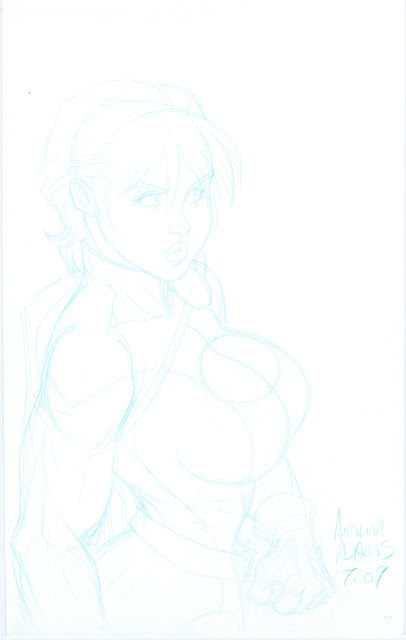 The First thing I did was added a panel boarder around the page in ink.  I've seen some of the commission pieces that Arthur finishes himself and I notice how he would sometimes draw the same panel boarder.  So I did the same.  After that, I used a thick and medium sized micron pen to ink in the areas you see below.  No brushes or quills for this, only Microns.  I know Arthur inks his own work with microns so I went the same route.   Some lines, I would go back and make them a bit thicker. 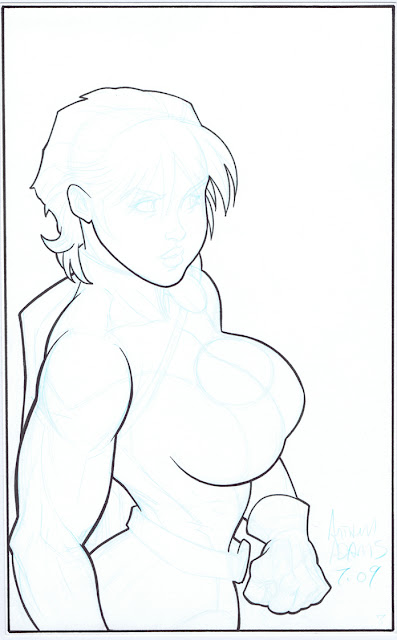 Next up, I used a medium sized micron and started inking the rest of the pencils.  I have five different tip sized microns as my disposal, so usually, I'll start with the thickest tip and work my way down to the finest.  While inking, I would add details such as the sections of the rope holding up her cape. 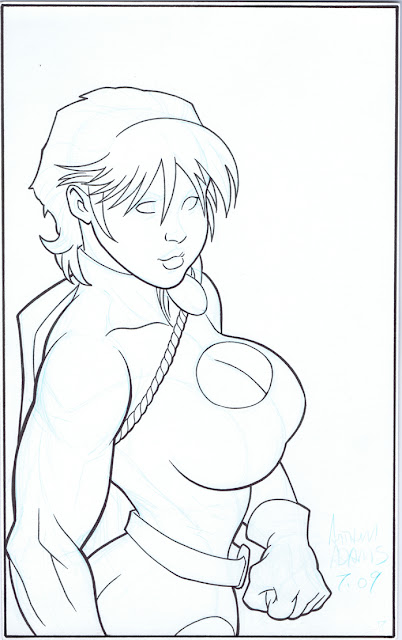 Next, I ink up the rest of the lines that were drawn in blue pencil.  At this point, I've pretty much inked everything that was pencilled.  I start adding more details.  An extra line around the designs of her outfit making it a double line.  Breaking up some of the lines while doing that.  I didn't do this randomly, but I was referencing other work Arthur has done and that lead me to follow suit. 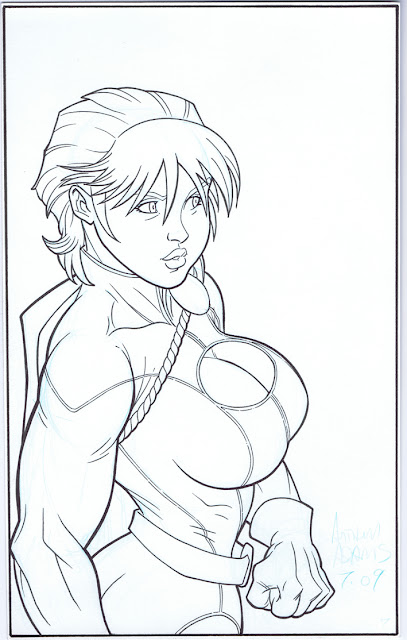 Next step, I started adding more minor details.  The little bit of blacks on her belt and on the cape behind her back.  Cross hatching underneath her neck and breast.   An extra line for the top of her cleavage.  Hatch lines around her areola.  Another oval on the disc holding the rope with shadow underneath.  Extra outfit design lines on her butt.  Extra hair lines, hatch lines, tapered lines, and more details that I think Arthur would add if he inked himself.  Again, all of the details I added, wasn't me randomly adding them for the sake of adding.  I actually referenced a lot of other work Arthur has done to get as close to his own inks.  So finally at this point,  I've added as much as I can to Power Girl and she's all done.  I could have called it a day and be done with it.  BUT... 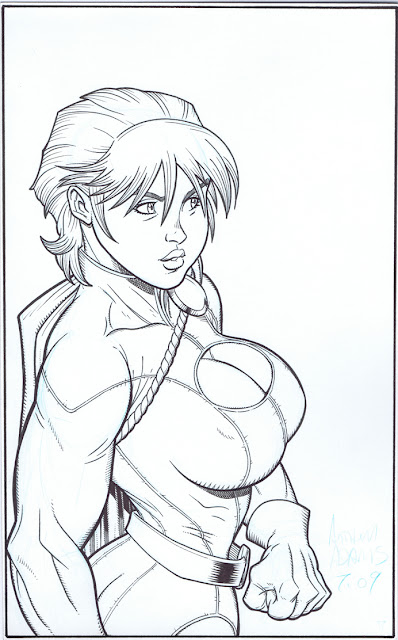 ...I decided to add a background.  Some of the Arthur's commission pieces that I've seen has this cross hatch texture in the background.  I've also seen him use only a micron to draw them.  Knowing that, I decided to give the background the same feel.  Which took a very long time.  More time than it took to ink Power Girl.  I kept cross hatching and decided to cross hatch less around her face horizontally outwards.  Sorta working it around how Power Girl is looking at something.  A few more hours later, and here's the results. 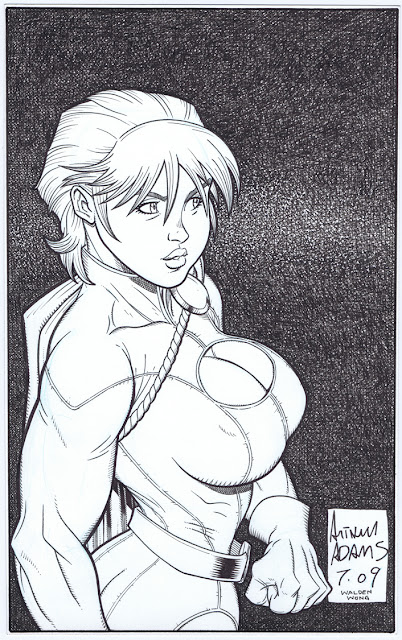 Finally, I chicken scratched my name right underneath Arthur's name and date.  Which only took me about four seconds.
Posted by Walden Wong at 2:39 AM 11 comments:

Pen & Ink before the Inking 2

Another blast from the past. 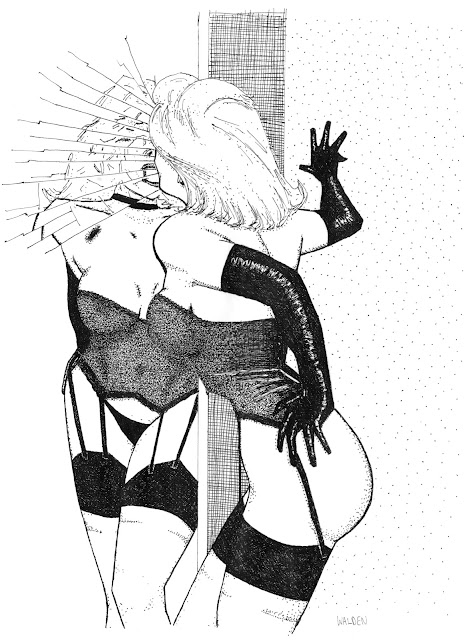 With this one, I played around with the stippling and gave her top a see through effect.  This was all done with a fine tipped technical pen.
Posted by Walden Wong at 10:06 AM 2 comments:

Got my copies of Superman Last Stand of New Krypton #2.  Pictured are the covers with bigger image of Superman on the left being the variant cover. 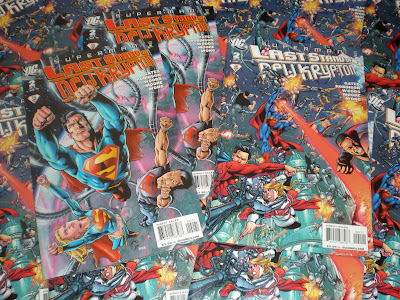 There were a few double pagers that I inked over Travis Moore's pencils.  Travis and I worked on eight pages together on this issue.  The rest was done by Pete Woods. 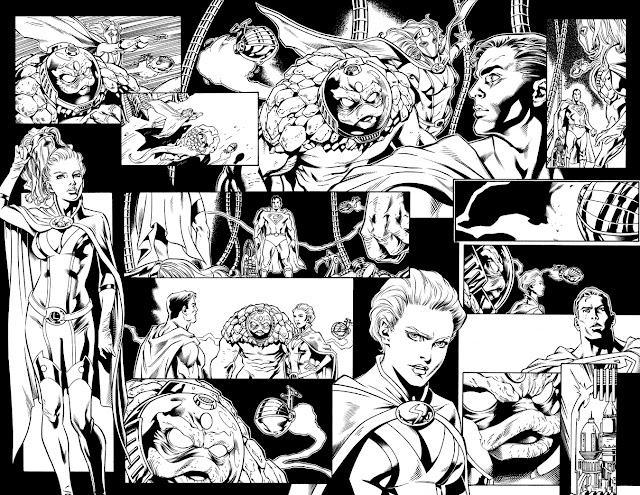 Here's that same page as colored by the colorist, Blond. 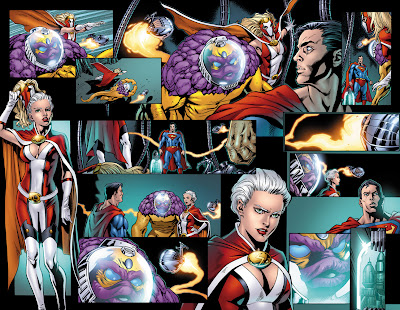 Another double page spread in black & white.  The first panel with all the buildings took longer to complete then the rest of them. 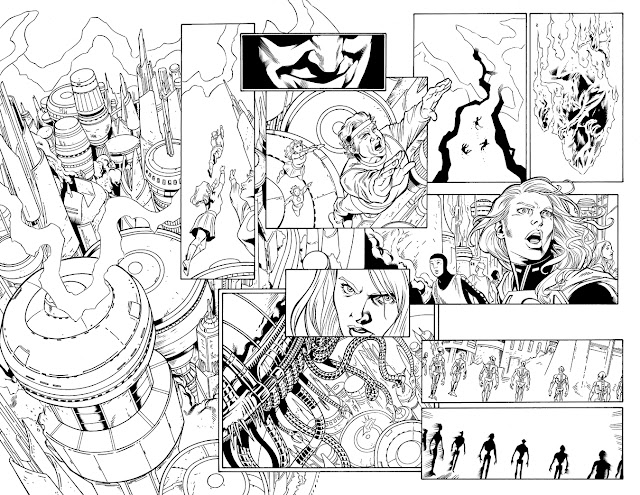 The colors for it. 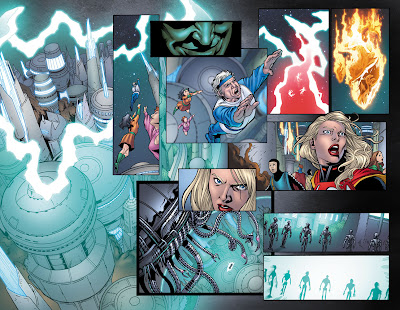 Finally, another double page spread which I finished last for this project.  Mainly because there were so many robots and I used templates for all of them.  I could have gone free hand without the templates and finish them three times as fast.   I just like spending that extra time to do things like that.  Lots of details here as you can see in the black & white. 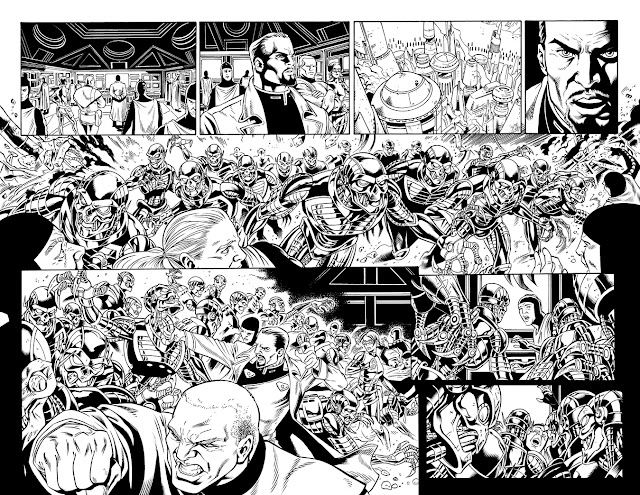 And here it is all colored up.  All the details are still there.  Just not as noticeable compared to the black & white above. 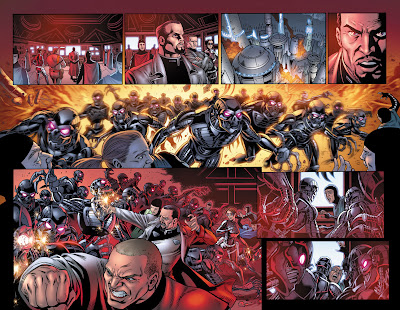 This comic is in stores now and you can read more about it by click here.
Posted by Walden Wong at 5:05 PM 2 comments:

Pen & Ink before the Inking

Old artwork that I've done a long time ago.  Before I even thought about going into the business of comics, I did some pen & ink art in a High School drawing class.  Of all the subjects that was thought in class, pen & ink was the hardest for me.  I couldn't erase like I did when I drew with a pencil.  I couldn't paint on top of mistakes like I did when I used oil colors, acrylics, or even charcoal.  One wrong flick of the quill and the ink will splatter everywhere and mess up the artwork. 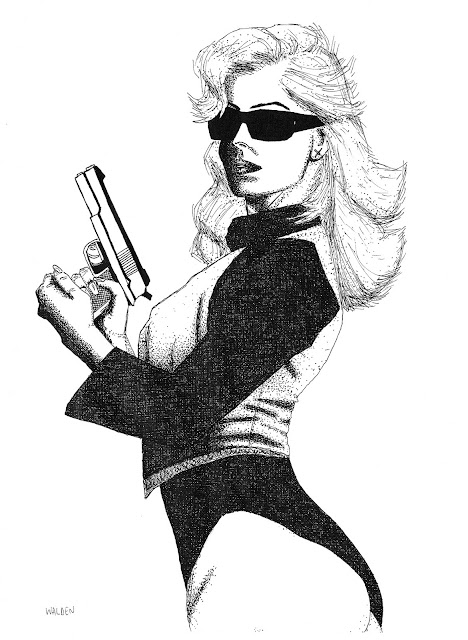 One of the comic books I had laying around was Black Kiss, drawn by Howard Chaykin.  I drew the same image from one of the covers on a regular piece of paper then inked it using what I learned...   stippling, thin lines, and cross hatching.  Unlike what was done on the comic cover, I didn't spot any blacks or use any line weights.  All the black you see above were cross hatching.  Over and over again until it started to look black.  Very tedious and repetitive.  Thin lines for the hair because I wanted a light image as supposed to dark black hair.  When I wanted tones and shading, I stippled and stippled and stippled.  Another task which took quite some time.

One of these days, I should ink a comic like that.  Of course, it would have to be on a comic which allows me the time to do all of that.
Posted by Walden Wong at 6:06 PM No comments:

Copies of GI JOE ORIGINS #14 that I worked on are out. There are two different covers.  Regular cover is the one with the skull and the variant edition cover (which I also inked) is of Ripcord crawling out of the ground. 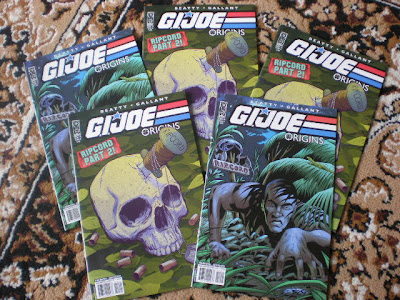 Below is the cover in black and white. 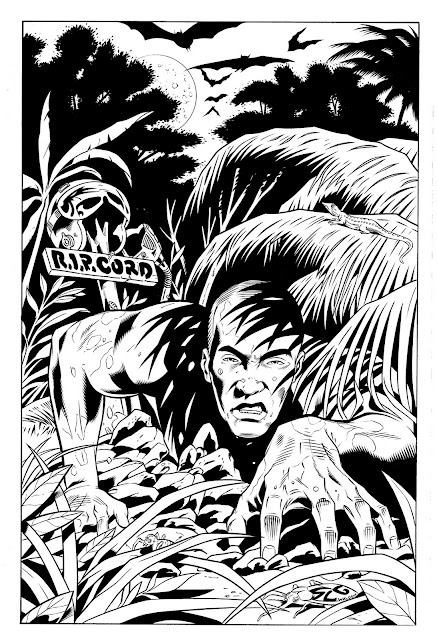 Here's an interior page from this issue. 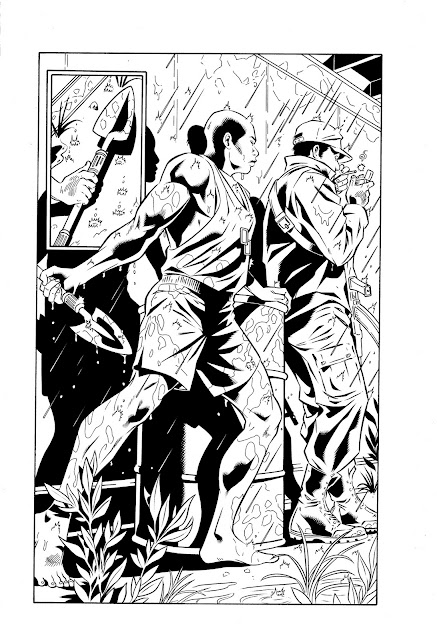 And another where Ripcord is having lunch. 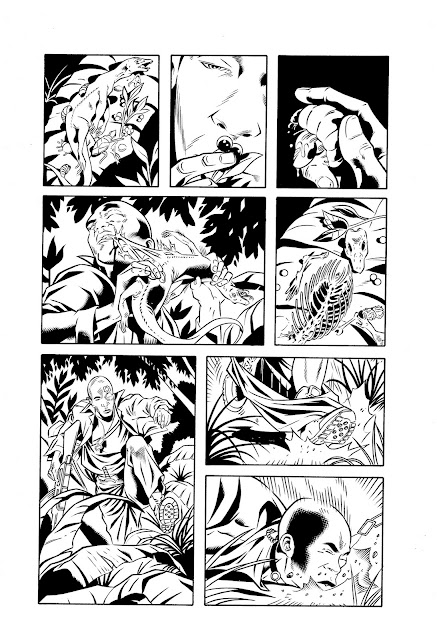 More about this issue by clicking here.
Posted by Walden Wong at 2:28 PM No comments:

This came in the mail today for me.  Two hardcover copies of JLA VOL. 3.  This volume is thick!  In it, are works that I've done in my earlier inking days at DC Comics.  Good times. 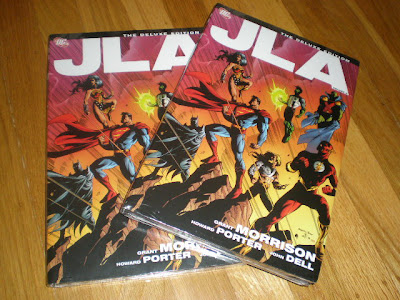 This volume is in stores April 28th and you can read more about this volume by clicking here.
Posted by Walden Wong at 2:53 PM 1 comment:

Joe Kubert and I

This past weekend on Saturday at Wonder Con, I got to see Joe Kubert Again.  Very exciting. 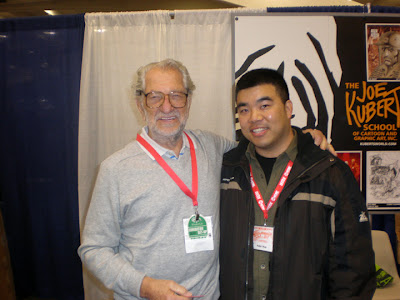 Here's another picture of us chatting.  I told him how we meet asking for a critique before my inking career started and what he said to me.  Especially the line... "You're one of those inkers I like to kill because you take jobs away from me."  He remembers that conversation vaguely which surprised me. 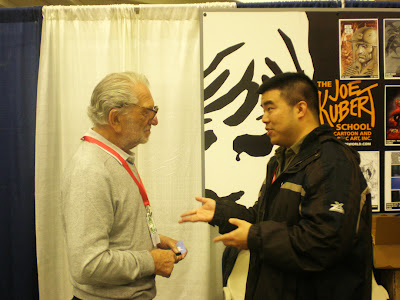 I told him I was working in comics now and how we worked on the same book, THE SPIRIT.  I did some interior work where he was the artist on the cover.  He smiled with pride and started asking me what I'm working on now and how I'm doing with everything and we chat some more.
Then on Friday, I went back to his booth to pick up one of his sketchbooks and we got to chat again.  One of the guys at the booth said, "You're Walden Wong."  I said yeah.  He said, you're the one on Facebook.  You were here yesterday and I didn't know that was you.  I said, yeap, that's me, and told him how cool it was to be added by Joe Kubert on Facebook.  Joe doesn't do all the technical stuff with Facebook, but he does read everything that goes through there.  Then the three of us started talking about facebook. 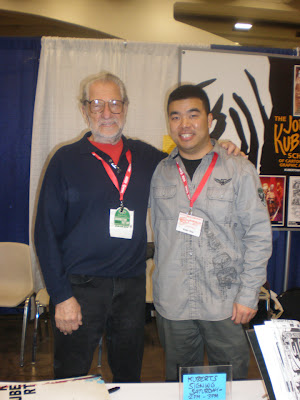 It was great to see him again.
I'll be posting more pictures from Wonder Con soon.
Posted by Walden Wong at 11:21 AM 8 comments: