Nominated in the Inkwell Awards

I was informed that I was nominated in the Inkwell Awards for two categories...

MOST-ADAPTABLE and the PROPS AWARD. Here's a screen capture. 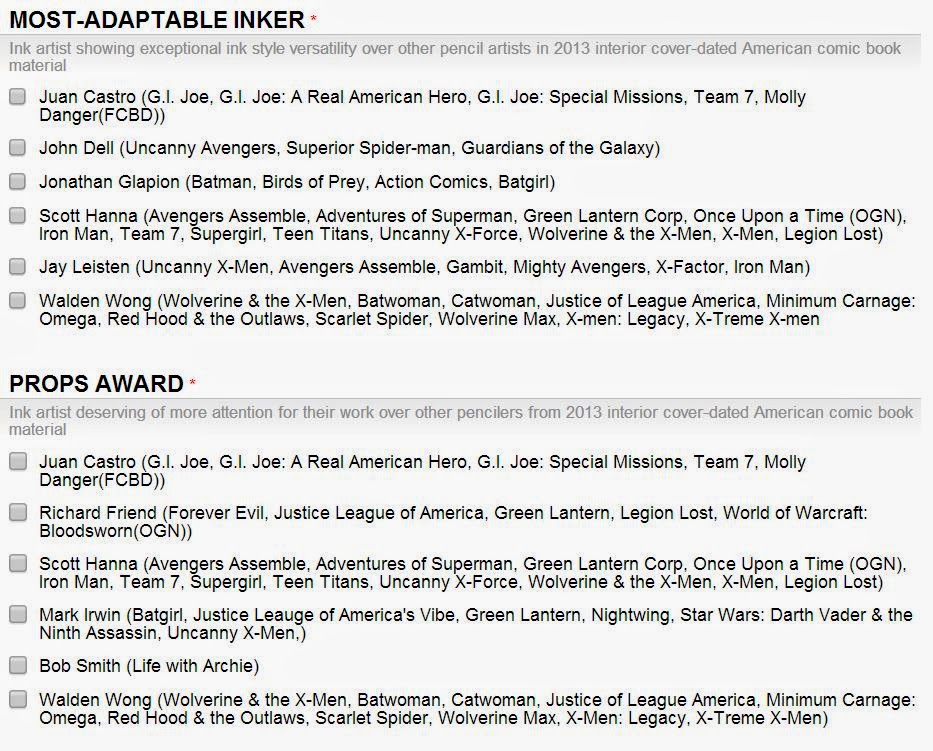 Here's a commission piece where I've inked over Arthur Adams pencils. Why so much much blacks? Continue reading.... 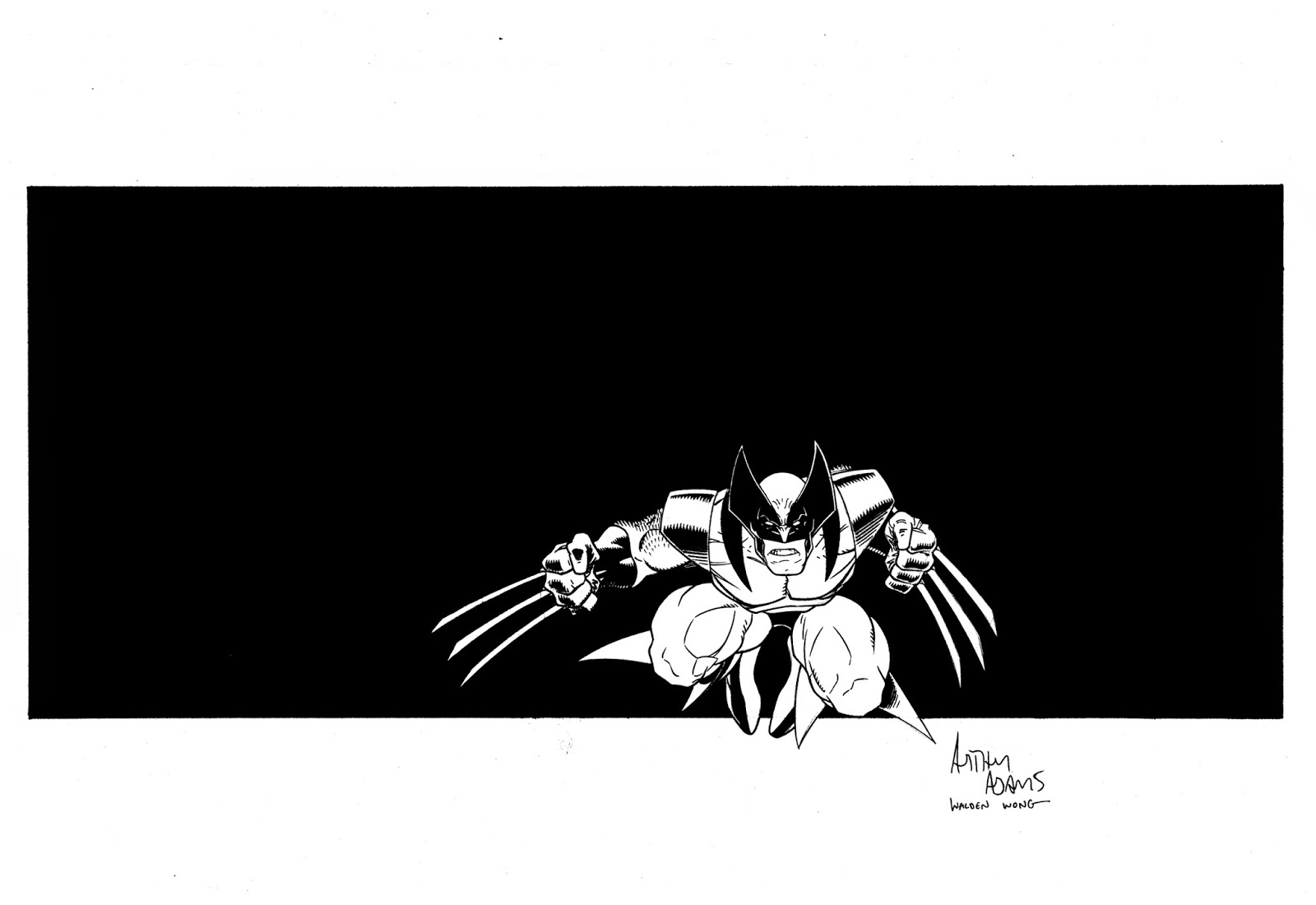 I was commission to inked over one of Arthur Adams pencilled artwork, which originally had Wolverine, Beast and Rogue on it. I believe this pencil art was one of the pieces Arthur had done years ago for the packaging label for Chef Boyardee. Not sure if it was used for the labels, but I do know it's an original finished pencil drawing from Arthur Adams that I got the pleasure of inking. The art collector sent me the original pencil art and asked me to ink all three of the characters and make the background all black. Also getting ride of the logo areas that was drawn in. Here's the original pencilled drawing. 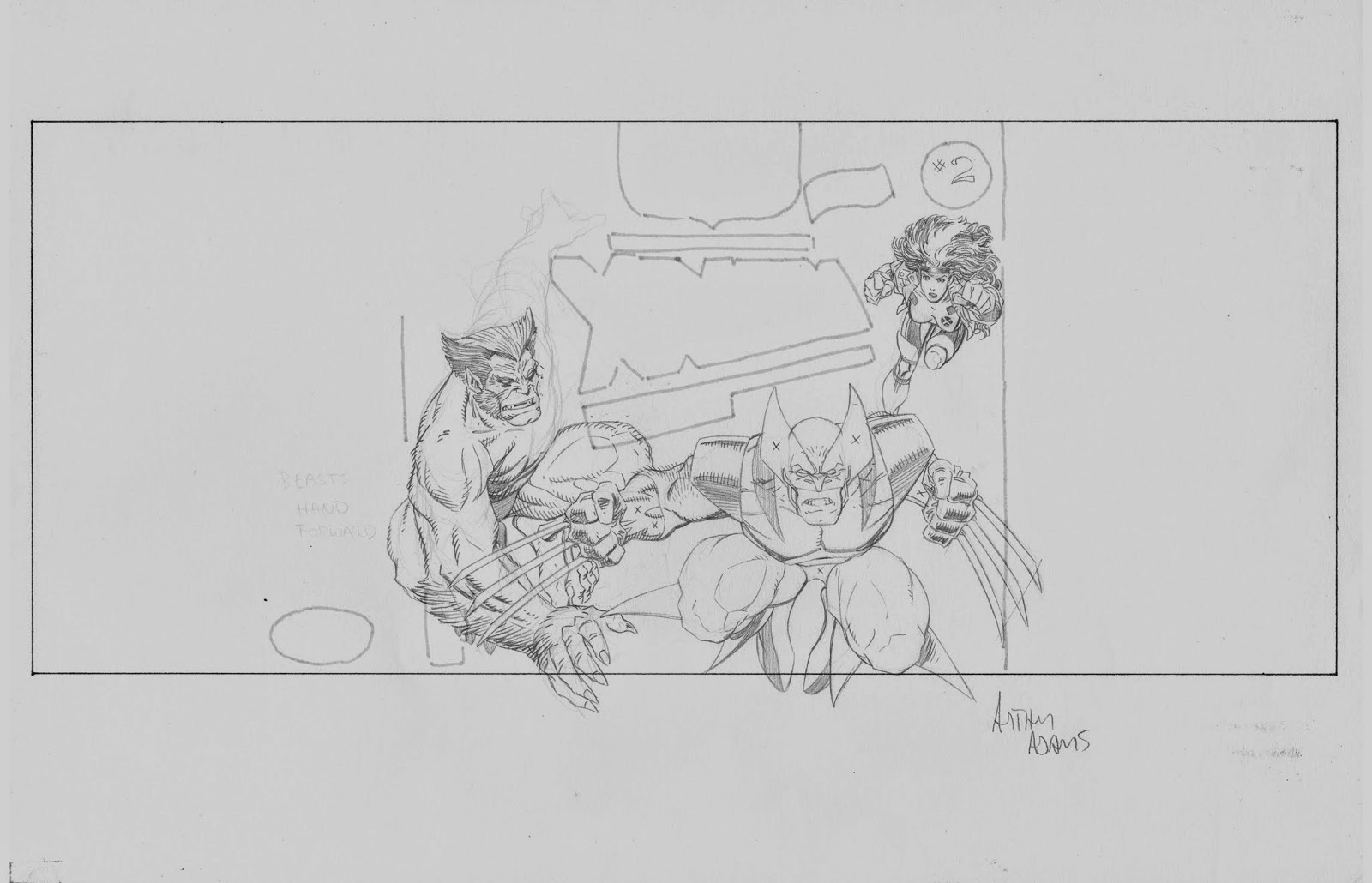 This is what it originally looked like after I was done inking all three character with a black background. 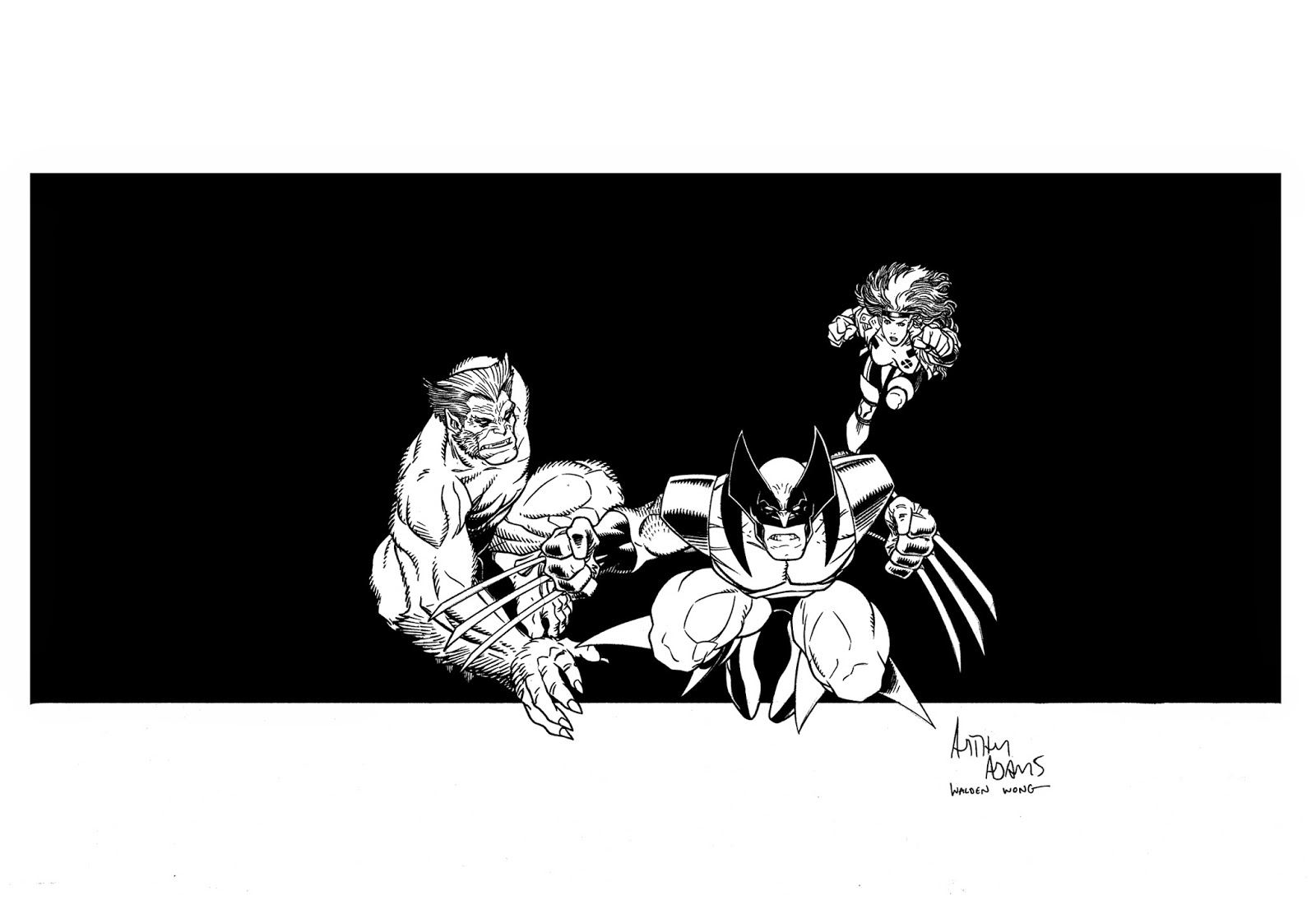 Just when I was done with the inks above, I was asked to get rid of the Beast and Rogue... fill them in with blacks so the only character you'll see is only Wolverine. I'm not sure why he decided that route and it seemed like a waste to get rid of Beast and Rogue... this was tough! Covering up the beautiful artwork that Arthur Adams has pencilled in and my inks over them. But what the client wants, is what the client gets. So I made this video of me covering it up. In the video, I've used a disposable watercolor brush to fill in the blacks.

Click video to watch me fill in the blacks...

Again, tough to do and painful to watch.

Here's a Teenage Mutant Ninja Turtle commission piece where I've inked over Mike Bowden's pencils.  I've worked with Mike Bowden on World of Warcraft over at DC Comics and well as Avengers for Marvel.  This was a treat to ink over his original pencils and have the characters at TMNT.  How do you know which character is whom?  For me, I look at which weapons they're holding, as I'm sure most of you use the same method to distinguish them apart.  Donatello, Michelangelo, Raphael, and Leonardo. 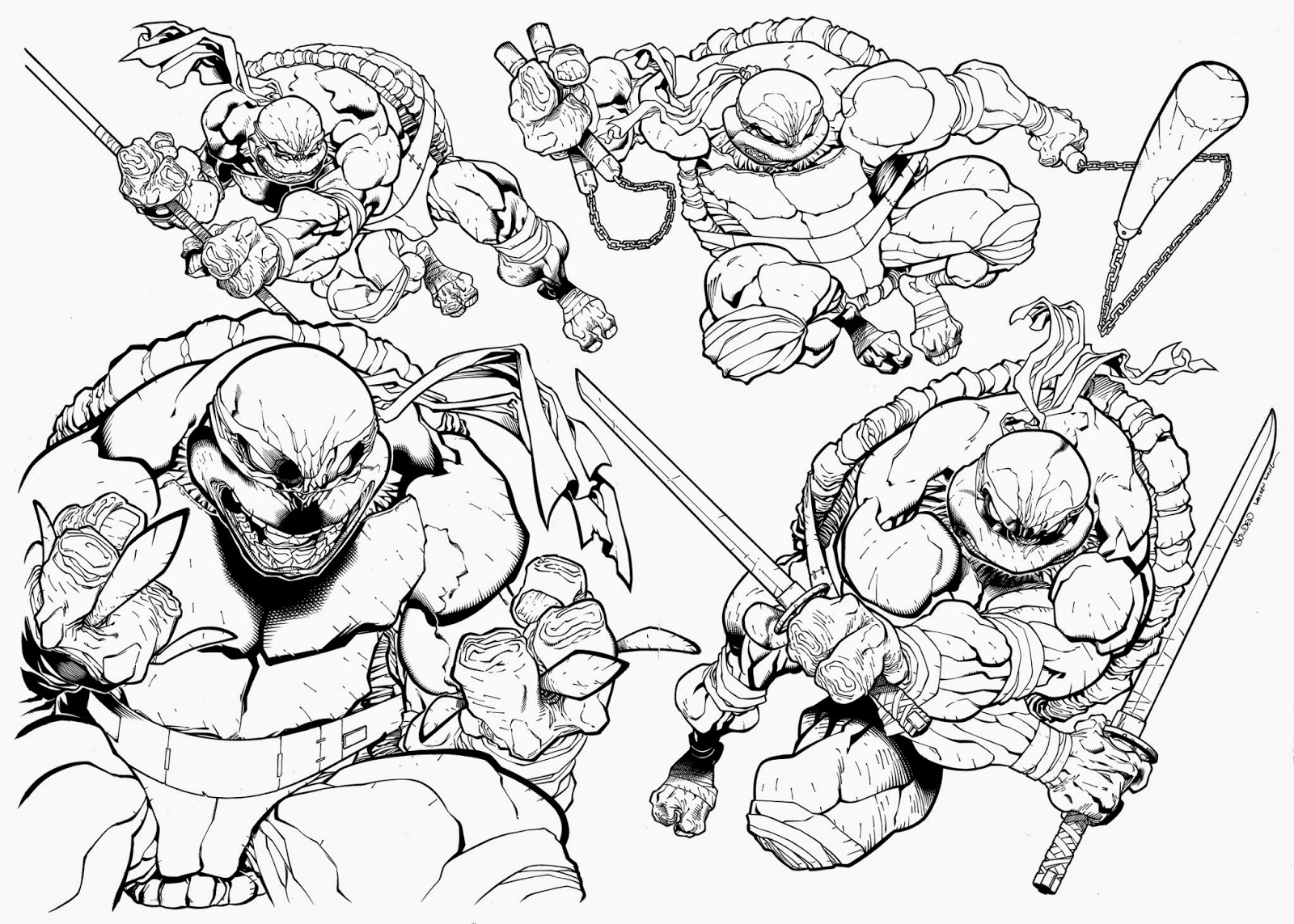 When I was inking the commission piece above, it reminded of the last time I've inked a TMNT piece.  Which was also the FIRST and only time I've inked them.  It wasn't even a commission piece.  I just inked it for myself and used it as a sample piece for my portfolio... before I started doing professional inking work.  Back then, Jeff Matsuda gave me pencil copies of a cover he drew.  This was the time when I was getting critiques and advice from established artist in the industry.  He gave me copies of his pencils and I would ink over them for practice.  Below is that inked piece. 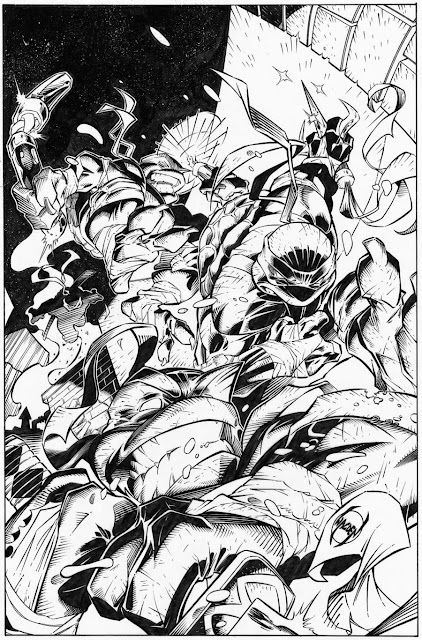 It was okay because it got me work in the industry.  This was one of the last pieces in my portfolio that got me work.  Looking at this now, I cringe.  I see so many mistakes and so many areas where I would ink differently if I was inking it today.  It was nice to ink the turtles again.  Maybe one of these days, I'll get to ink them on a book.  That would be fun.
Posted by Walden Wong at 5:20 PM No comments: