NAUSICAA OF THE VALLEY OF THE WIND BOX SET

Since youth, I've been a Hayao Miyazaki fan.  Of course at the time, I didn't know who he was.  Just the movies he brought to us.  As I watch more of his films, I started to recognize his name and the quality of his animated films.  Some of my favorites are My Neighbor Totoro, Spirited Away, Castle in the Sky, Princess Mononoke, Porco Rosso, Howl's Moving Castle, Ponyo, and of course, there's Nausicaä of the Valley of the Wind.

Then I discovered the comic book, Nausicaä of the Valley of the Wind, that VIZ published between 1988-1995.  They were those smaller 48 page black and white comics published in America, translated from Japanese and lettered by Tom Orzechowski and Wayne Truman.  I bought them all up as I found them.

In 1995, VIZ decided to publish all the same stories in a 'perfect collection'.  Four thicker volumes that were around 260 pages each.  Graphic Novels, as they're call today.  However, they were smaller in size.  Sort of a pocket book.  You get more story and pages to read, but the art was shrunken down a bit.

Then in 2005, VIZ decided to publish Nausicaä of the Valley of the Wind again .  Only this time, to have it in a much larger size format.  Larger area size than the original comics.  Large than the typical regular sized comics of today.  Mainly so people can see more of the artwork.  Seven volumes ranging from 130 to 230 pages each.  And they decided to have the whole story re-lettered and the art touched up.  This is where I come in.  VIZ contacted me and offered me the project.  Re-lettering the whole story and touching up the artwork over original Japanese stats from Studio Ghibli.  I jumped at the opportunity.  It was months of hard work especially since the lettering and art touch-up had to go back to Studio Ghibi in Japan for approval.  But every minute was worth it.  I got to re-read the story again, I got to look at all the artwork very closely, panel to panel with a fine tooth comb, I got to touch-up and re-draw some of Hayao Miyazak's work, getting to his style as close as I can.  In the end, VIZ told me Studio Ghibi was impressed with my work.  Here's a link to all seven volumes I've worked on.

Fast forward six years later to 2012.  VIZ decides to publish Nausicaä of the Valley of the Wind as a two volume hardcover slip case Box Set.  They contacted me again to offer me the art touch up and spot lettering.  I accepted in a heartbeat.  Didn't even need to think about it.  Once I heard the name "Nausicaa", the words "Yes" couldn't come out faster from my mouth. 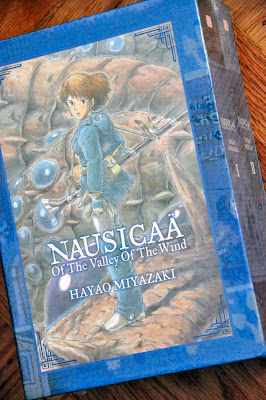 Here are pictures of the published book.  It's huge and heavy!  Larger than the thickest telephone book out there.  Two volumes in one slip case with a poster of Nausicaa.  You can get more info about Nausicaä of the Valley of the Wind Box Set here. 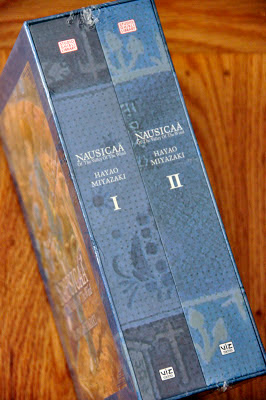