Just got comp copies of THE BRAVE AND THE BOLD #31 in which I did some work in. My inks over Justiniano's pencils on the eight page flashback sequence. Flashback sequence meaning there were two art teams. One team worked on the regular story and when there was a flashback scene, Justiniano and I were driving. The flashback sequences were spread throughout the book about the Joker... Before he was the Joker. It focuses on him as a child and how he grew up. 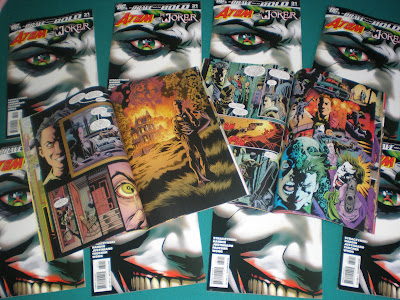 Here are some black and white inked pages. This is a nice collage splash page. Justiniano's great at pencilling pages like this and I had lots of fun inking it. I applied as many different textures as I can on this one page alone. 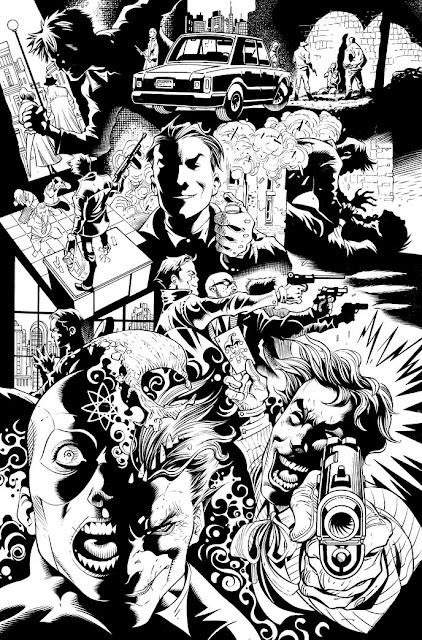 Below is another splash page with the Joker as a kid. Again, as much textures as possible. In the pencils, Justiniano indicated black for the foliage. I decided to stipple in the blacks to give it more of a leaf feel instead of just filling it in with a solid black. Some of the grass on the floor was indicated as black. I decided to ink in each spear to give it more texture. By the way, can you guys see the easter eggs in the art? First of all, when I was speaking to Justiniano, I told him that the house in the background reminded me of the Bates Motel in Alfred Hitchcock's movie, Psyco. Justiniano's said that was the inspiration for that drawing. Then Justiniano asked me if I see the hidden image in the background. Here's somewhat how the phone conversation went... 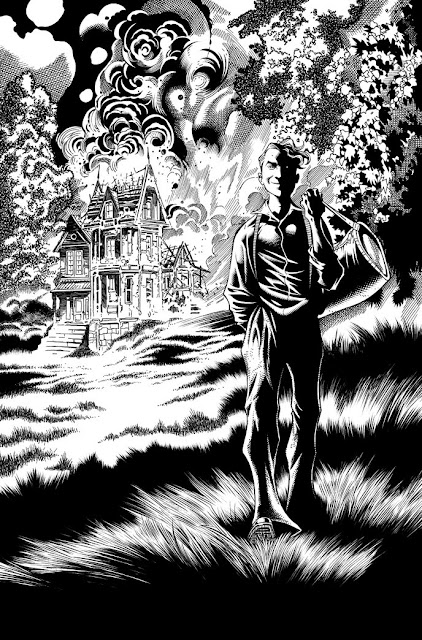 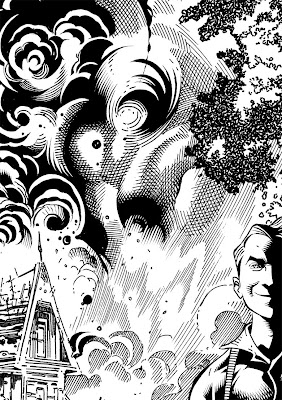 So, what do you guys see? Is it a smoky image of the Jokers face? Or do you see something else?
THE BRAVE AND THE BOLD #31 is in stores now and you can find out more by clicking here.
Posted by Walden Wong at 1:02 PM