My first comic gig... EVER!

When I was a wee lad and before I did any inking work for the major publishers, I started out small. Below is the first comic I've ever worked on. A book called Shotgun Mary Shooting Gallery published by Antarctic Press in 1996. They're also the same publishers that publishes their more popular title, Ninja High School (which I also did some inking work later on after Shotgun Mary). Not only is this my first published comic, this was also the penciller's first published work whom I've inked over. That penciller is Pete Woods who's doing all sorts of project with DC Comics today. 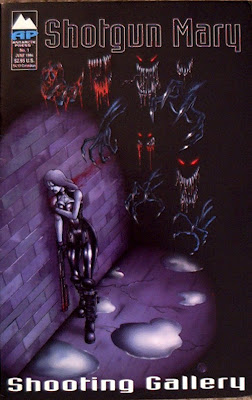 Pete Woods and I didn't know each other at the time. This was one of those projects where I sent in submissions samples, got a call back from the publisher, and was offered the project. We never had each others contact info while we were working on this book. It was years later when Pete and I bumped into each other at a convention and started working together again. Which lead to a lot of our early Deadpool days over at Marvel Comics. Today, Pete and I are great friends. Both of us live in different states, but we've been to each others weddings and catch up every time we see each other at conventions.

Anyway, I still remember how much I got paid for working on Shotgun Mary. Actually, I have a photocopy of that same check on display in my studio to remind myself of it. I've inked about twenty pages and got a check for $140. Which breaks down to $7 a page. I knew that was how much I was going to make going into the project. Not a lot of money which wasn't important to me. It was being able to work on a book that will be published that made me happy. Even today, I get excited over the projects I work on. Money is nice and all, but the projects... That's what keeps the excitement flowing!
Posted by Walden Wong at 9:37 AM