On October of 1997, I've bought one share of Marvel stock. I'm not a stock exchange high roller or anything like that. There was this company that you could purchase one share of stock from. They would obtain a nice clean flat stock certificate, matte it, and frame it before they send it to you. Once you get it, it'll be nice and ready to hang on your wall. At the time, they had different stocks you can choose from... Disney, Warner Brothers, Coca Cola, and others. Each being a different price because, after all, they were real stocks and were sold according to market value. Me being a comic book fan, I wanted a Marvel Stock certificate. With the purchase, stock holders would get an annual report from Marvel which was in a form of a comic book with artwork in it. Here's a picture of that actual stock with my name on it also indicating only one share. All nicely framed and matted. 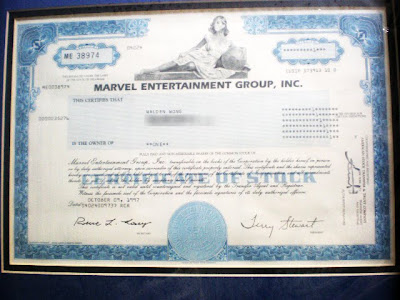 When I purchased this stock, I didn't know Marvel was planning on filing Chapter 11 Bankruptcy. Still, Marvel stock was still being sold and I never gotten any of those Comic Book Annual Reports. Before I knew it, Marvel filed and the stock was worthless. Later on down the line, Toy Biz bought out Marvel and there was a whole new Marvel stock. The stock previous owners had were still worthless. From then on, there were court battles and claims to get money back due to the bankruptcy for each original stock holder. Myself being an owner of one share was included. Just today, I get a letter with a check attached. Letter reads yadda yadda yadda distribute $50 million to the beneficiaries of the trust yadda yadda yadda. Cool!!! I'm getting some of that money! Here's that letter. 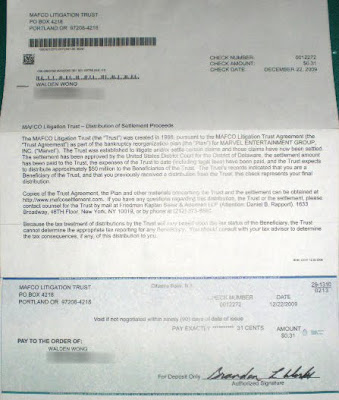 But Wait! I take a closer look at the check and what do I see? A check for thirty-one cents. Yes, $0.31. To get this to me, Postage cost more than this check. The paper it's printed on cost more then the value of the check. And it would cost me more to drive to a bank to deposit this check for $0.31. 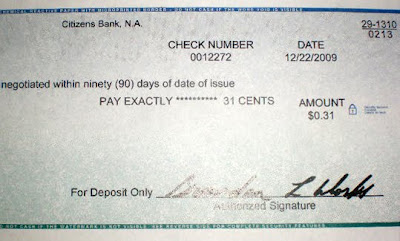 Anyway, I read that beginning in the year 2010, there will be no more Marvel stock because Disney bought out Marvel. Current owners of the more recent Marvel stock had doubled turning it into a Disney stock. People who has the Marvel Stock certificate can just hold on to them or turn them in for a Disney stock. In my case, I have a original Marvel stock that's worth less than the check I got. Still, it's nicely matted and framed. Not to mention, it's something that was part of comic history and can no longer be purchased.
Now what should I do with this $0.31 cent check? Maybe I should matte and frame it as well. Hang it up next to the Marvel Stock. It'll make a great conversation piece.
Posted by Walden Wong at 12:53 PM