Over a year ago, I was contacted by a magazine to write an article on how I ink a page. I don't believe it was ever used. At least from the few times I asked, I've never got a clear response. Instead of having it go to waste, I'm posting it here.

Usually when I ink, I would use whatever tools that will create the right look. Brushes, quills, pens, fingers, anything. As an inker, it's always good to be able to use any and all tools out there. Don't be limited to just a brush or just a quill. The more you ink, the better you'll get at it and the more you'll understand your tools. By no means do I ink everything the same exact order as explained below. Every page varies and are inked differently. That said, here's a cover I inked for DC Comic called REIGN IN HELL. Issue 7. As usual, you can click on anyof the images to expand the view.

1) Below are the pencils by Justiniano. Before I start inking the page, I would look at the pencils and study them. At the same time, thinking what I can do with textures and rendering. I've been inking Justiniano's pencils for a long time. We're like partners in crime where we know what to expect from each other. Usually, I can see how the page will look inked before I even start inking it. 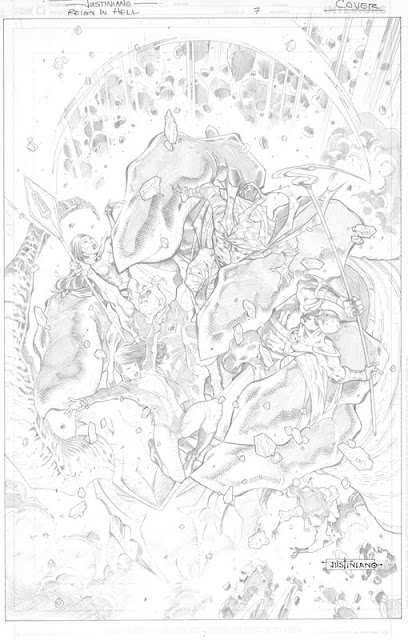 2) Here's where I ink in all the lines that I think requires a stencil. For this task, I used technical pens. Sometimes, I would use a micron pen or just a regular ink pen for this depending on who's pencils I'm inking and what it calls for. Whichever tools give the best look is the one I'll use. I also print my name right under Justinainos'. I usually like to write my name smaller than the penciller's name. Never bigger. When the penciller doesn't put their signature on the art, I won't either. 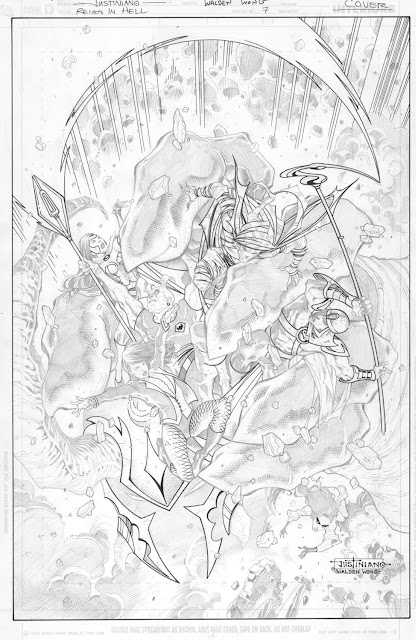 3) In this image, I render all the areas that require tapered lines. Tapered lines are essentially hatch lines that gets thicker towards the base where it touches the black area. Vice versa, thinner as it reaches the white area. This is usually done to create a grey area from white to black. I used a brush for this task. Again, depending on who I'm inking over, I could use a quill or a micron pen. When I need the grey areas to be darker, I would go on top and cross hatch the lines. 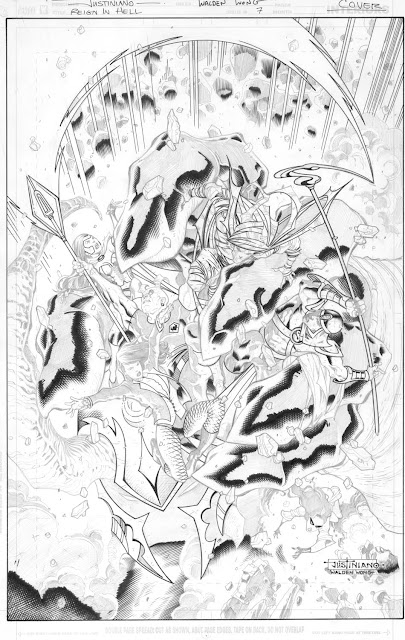 4) After all the tapered rendering, I go with a big thick brush and fill in all the blacks. Making sure I don't go over the pencilled lines so I avoid going near the edges with the ink. Sometimes, I would fill in the blacks last. But in this case, I filled it in first. Again, it really depends on the page I'm inking. 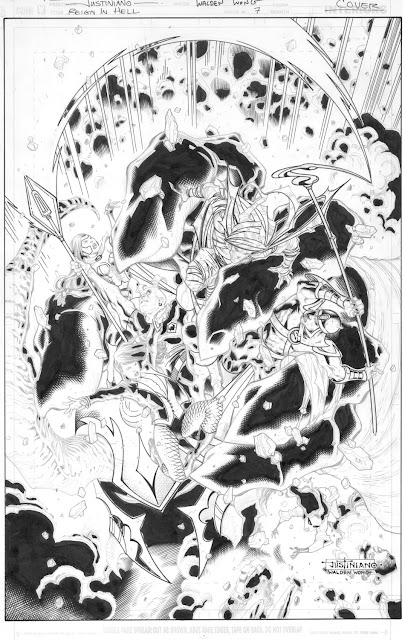 5) Now I'll pull out my finer brush and fill in all the finer black areas. Sometimes there are smaller areas that a brush can't get to and that's when I use a technical pen to fill them in. This will complete all the black areas. 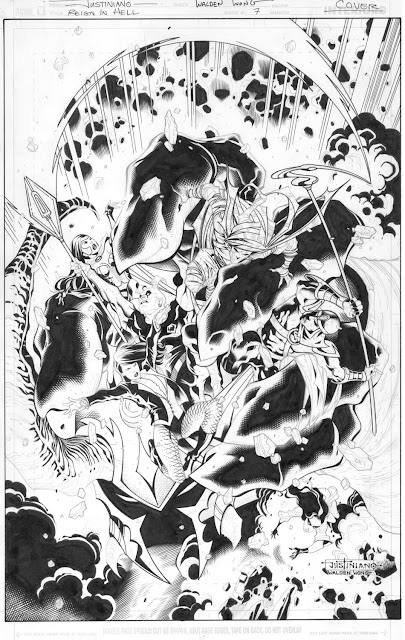 6) After all the blacks are filled out, I would start inking the holding lines (or outlines) of each character. Giving them the right thin and thick to make each character pop out and stand alone. It's always good to go really thick as well as very thin to a point where you don't even see the lines connect. That gives it more of a three dimensional feel to your inks. Again, it depends on the pencils and who you're inking over. 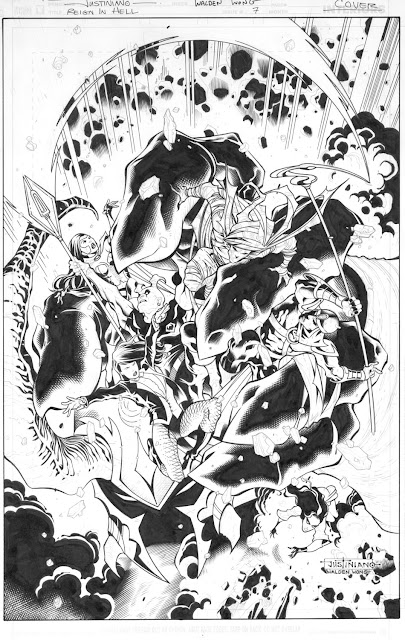 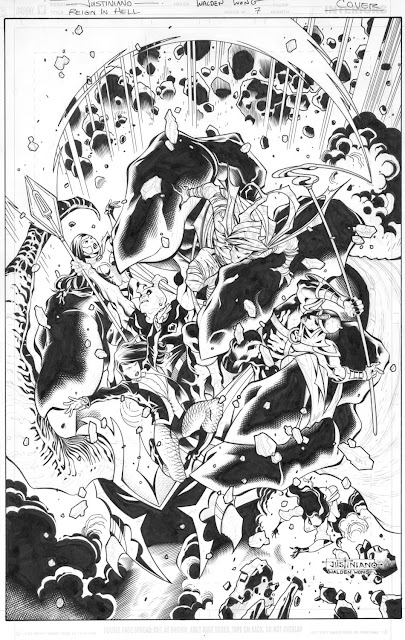 8) Now onto the faces. Faces are important. That's the first thing everyone sees when reading comics. That said, I would ink the faces are carefully and as precise as can be. Making sure the faces are clear. Exactly what the penciller want. With the smaller faces on the page, I would use a pen. Sometimes a very fine pen or a very fine new quill. Bigger faces, I would use a brush because it can give me a thicker line faster and a thin quill pen where I have to ink it two lines and fill it in. 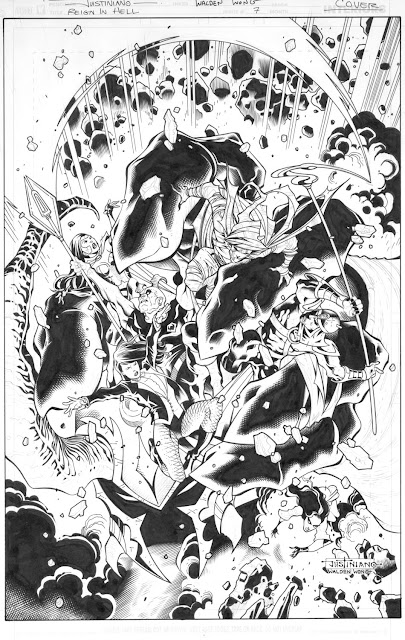 9) In this image below, I would ink the rest of the characters body. Using whatever tools necessary to create the right look and dept. Keeping in mind how thick and thin each line should be. 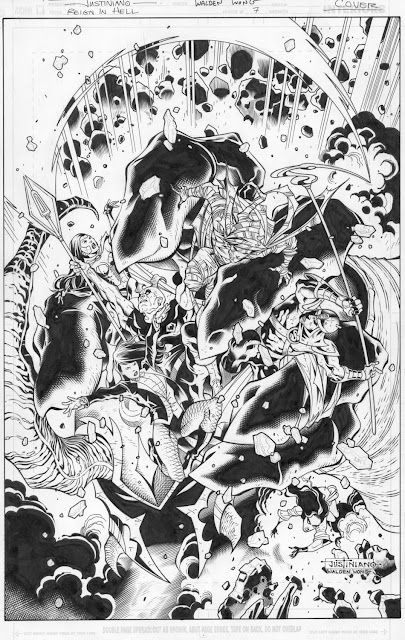 10) Below, I would ink everything else on the page to complete the inks. Again, keeping in mine all the different textures. 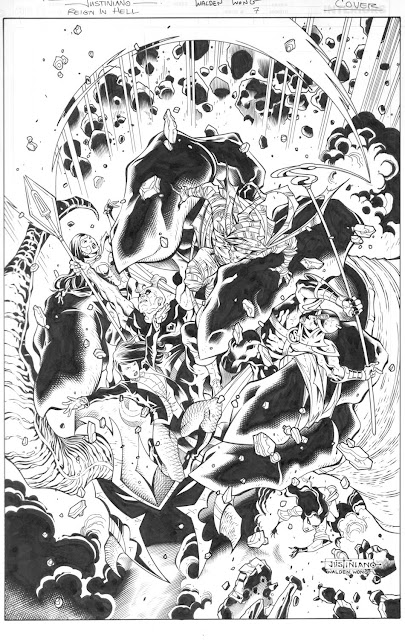 11) After everything is inked and dried, I would erase the whole page and clean it up. Any pencil smudges that was on the page will be erased. Sometimes erasing inks will turn the inks grey. This happens depending on what type of bristol boards are used. Some boards hold the blacks nicely while others boards doesn't and the inks goes grey during the erasing process. After erasing the page, I would re-spot the blacks to give it a nice dark black feel. It's really not necessary to do this especially since greys doesn't turn up in black and white scans for production. I personally enjoy doing it because it makes the original art feel more complete. When the inks are dried, I then use white ink and/or white out for more effects. On this cover, I added white to some of the rocks flying around. After that, it's all done and ready to go. 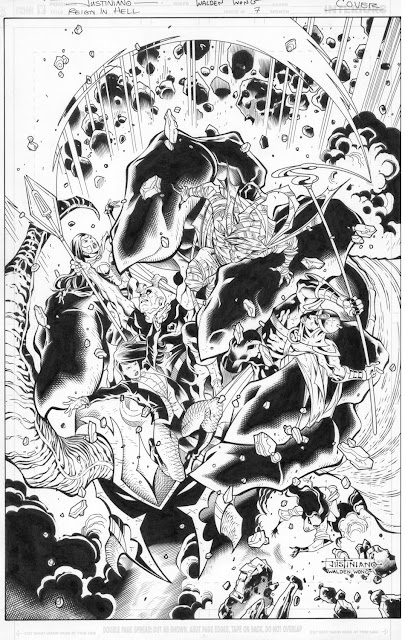 12) All the images above were scanned in greyscale where you can see the pencils and the inks. Below is the scan of the page in black and white. This is the image which would be used to production. After I scan the image, it goes to the editor who forwards it to the colorist. 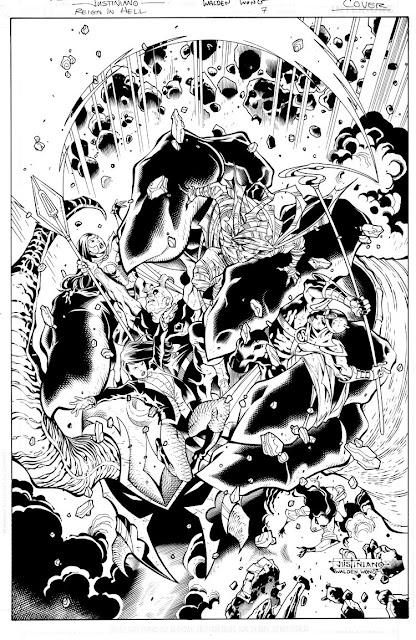 13) The colorist, Mike Atiyea, does his magic and here's the final image before logos and text. 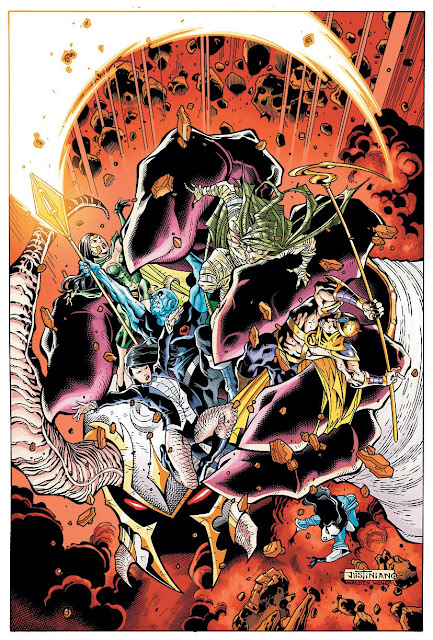 And that's how this cover left the penciller, traveled through the inking wormhole, to reach the colorist.
Posted by Walden Wong at 11:50 AM